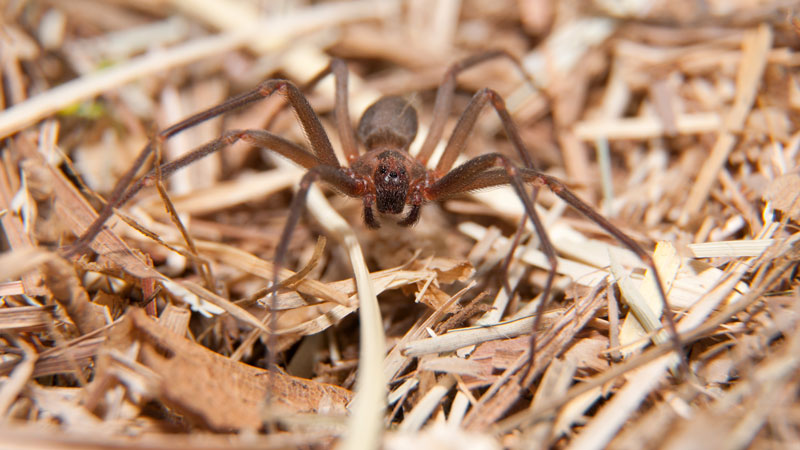 Disclosure: This post may contain affiliate links. This means that at no cost to you, we may earn a small commission for qualifying purchases.
5 shares

It’s a common taunt to play the world’s tiniest violin if someone’s telling a sad story. It’s also a pretty sad story when someone runs into a spider bearing a tiny violin.

The markings of the brown recluse are just as infamous as the black widow’s hourglass, and they’re just as likely to end up in your home. It doesn’t help that these two species often fight for the number 2 spot on US charts.

But there’s a lot more to these spiders than meets the eye(s?). Read on, brave homeowners, to learn some surprising facts about these octopedal terrors and how to get rid of a brown recluse if you run into one.

Getting to Know Brown Recluse Spiders

Brown recluse spiders are one of the top five most venomous in the world (and arguably second in the United States), yet they’re surprisingly safe to be around. These critters are extremely shy and will only bite when cornered.

There are 12 species of recluse spider worldwide, with the brown recluse coming in only second to the Chilean recluse in the genus’s venom power. The brown recluse is sometimes referred to as the fiddleback or violin spider due to its telltale markings. It’s one of the 9 most common spiders found around the house.

Did You Know:
Brown recluse spiders are actually kept as pets in some parts of the world and are especially popular in Australia among experienced arachnid enthusiasts. While not safe around small children, their docile manner makes them easy to care for. As with famous human killers, there are always copycats out there trying to emulate the brown recluse, but there are some rather distinctive features which will help you discover if it’s the real deal.

While it’s not pleasant to get too close, if your spider has abdominal markings, spiny leg hairs, multiple colors on its body, or more than six eyes, it’s just another Elvis recluse impersonator. Brown recluse spiderlings take 10 to 12 months to mature and are easily mistaken for young black widows. Upon reaching adulthood, they will usually live one to two years, although ideal conditions may allow them to live for as long as three years.

Surprisingly, brown recluse spiders prefer their food to already be dead, and may live for up to six months in an airtight container without food or water, and it’s believed that figure may be as long as 10 months in the wild.

These critters prefer to mate in the summer when food is most plentiful. Adult females have the ability to double clutch, i.e. lay a second egg sac soon after the first if something has happened to it.

Each clutch may contain as many as 50 eggs, with the average female being able to lay as many as 300 eggs during their lifetime. The silken sacks are webbed in a safe place and eggs generally hatch in three to four weeks for the process to start over.

Related: How to Get Rid of Spider Eggs

Where Are Brown Recluse Spiders Found?

These tiny critters are very shy and prefer warmer climates, so there’s a chance you may never encounter one (although, let’s face it – if you’re here then you likely have one reading over your shoulder). They can be found in almost every state due to accidental hitchhiking in cars, trucks, or moving vans.

They’re far more robust than most spiders, being able to handle temperatures ranging from 40 to 110 degrees, they’re a spider that will stay active during winter inside a home. They’re also primarily nocturnal hunters.

Unlike many hunting spiders, brown recluses like to build webs in whatever cracks or crevices they’ve decided to call home. They’ll remain safely hidden in these dens until evening when they emerge to hunt insects. They’re also known to nab scraps when insects aren’t as readily available.

Related: How to Get Rid of Spider Webs and Cobwebs

Being incredibly shy, brown recluses will flee from humans when possible, and will often stay in a new den until they feel safe enough to explore. Human structures are ideal locations for them, but they will also make wood or rock piles, vehicles, and even cracks in your mailbox home.

Also, since spiders have to eat, they have to poop so you can often identify them by the size of spider droppings.

Symptoms of a Brown Recluse Bite While brown recluse spider bites aren’t usually fatal, they can still be incredibly destructive if left untreated. The bite starts off as a typical small, inflamed bump with the pain slowly growing over the first eight hours. The venom may also cause chills, fever, or body aches.

What makes brown recluse bites so dangerous is the risk of necrosis. Sometimes, the bite will turn purple or dark blue as it dies, and the necrosis will spread to the surrounding tissue, resulting in an open ulcer. Usually, the ulcer stops growing by the tenth day.

While we won’t show a picture of a recluse spider bite that results in necrosis, Google Images can help with that. (Warning: graphic images)

While the ulcer may heal after several months on its own, more serious cases may require multiple skin grafts or even lead to amputation. In worst case scenarios, it has even been known to result in death.

When you believe a family member or pet has been bitten by a brown recluse, you should seek medical attention or contact a 24-hour emergency vet immediately.

You can pre-treat the wound by first cleaning with a mild soap, then applying an antibiotic ointment. Add a cool compress of some form (an ice pack or even a damp washcloth) and elevate the wound, if possible. Humans may also choose to take some Benadryl or other antihistamine to help with the itching.

Note that your doctor may ask you to bring the spider or a picture with you to help identify the species. The Mayo Clinic outlines a number of questions your doctor may ask, as well as treatments they may offer. Meanwhile, PetMD has useful information for when you believe your cat or dog has been bitten.

One of the most common recluse imposters is another venomous species: the hobo spider. Thankfully, there are some ways to tell them apart.

Hobo spiders tend to have a more limited range, being found mostly from Montana to the Pacific Northwest and south only as far as Utah. They’re not native to the US, and have brownish yellow markings along their otherwise brown bodies.

Adult hobo spiders are smaller than brown recluses with shorter legs and are trap spiders, rather than hunters. And finally, they’re not as timid around humans, so if it doesn’t run, it probably isn’t a brown recluse.

Getting Rid of Brown Recluse Spiders

A brown recluse infestation can seemingly appear out of nowhere due to the shyness of these critters. Seeing them usually means your infestation is migrating elsewhere, but it also means a higher risk of getting bitten.

When you discover or suspect brown recluses, it’s best to do a clean sweep and eliminate any dens before they have a chance to multiply. You can’t get rid of spiders if you haven’t located their hiding places. Much like bed bugs and other small pests, these guys can end up in just about any tiny space. Before beginning, make sure you’re geared up to avoid an accidental bite from this or other venomous spiders which you might discover.

Put on some gardening gloves to protect your hands and wear tight-fitting clothes if you think you’ll brush against potential hiding spots. A flashlight, especially a penlight or other small device is incredibly useful for checking dark spots. You may also wish to use a small dental mirror to help with difficult angles.

Next, begin systematically searching places where small cracks or holes are common. You’ll need to be thorough when you suspect recluse activity. Some common spots include:

How to Kill Brown Recluse Spiders Getting rid of spiders, especially the dangerous ones, rarely means having to hire a pest control professional. Instead, you can purchase a wide range of chemical or trap solutions – or use a DIY remedy.

Try some of these tactics to help eliminate the problem without spending a fortune. Note that your handy Bug-A-Salt gun won’t do a thing against brown recluses except make them mad.

Contact Aerosols – Providing a quick-kill, these sprays leave no residue, so they’re much safer around children and pets. The trade-off is you have to directly spray the spider to kill it. Terro Spider Killer usually gets the job done.

Liquid Insecticides – The choice of most exterminators, a liquid poison is easily sprayed, seeping into spots you otherwise couldn’t reach. Be sure to check the label to ensure any chemical sprays will work on spiders. Demon Max insecticide is one of the best for spiders of any kind.

Spider Traps – Able to handle spiders as large as a wolf spider, these sticky traps aren’t much different than the glue traps you’d use for insects. The only real downside is that traps can be messy or get stuck all over your pet’s fur if they have access. We recommend Catchmaster brown recluse spider traps. They’re cheap and effective.

Vacuum – Your vacuum cleaner can do a lot more than remove crumbs. Using an edge attachment, you can yank spiders out of hiding and dispose of them safely. Or for easy portability, get a BugZooka to suck up the spider from a safe distance or a My Critter Catcher for a cheap, low tech option.

There are a few simple ways to make your home less hospitable for any spider population. These methods will also help eliminate a lot of other pests, so it’s worth following these tips even if you haven’t confirmed the presence of recluses.