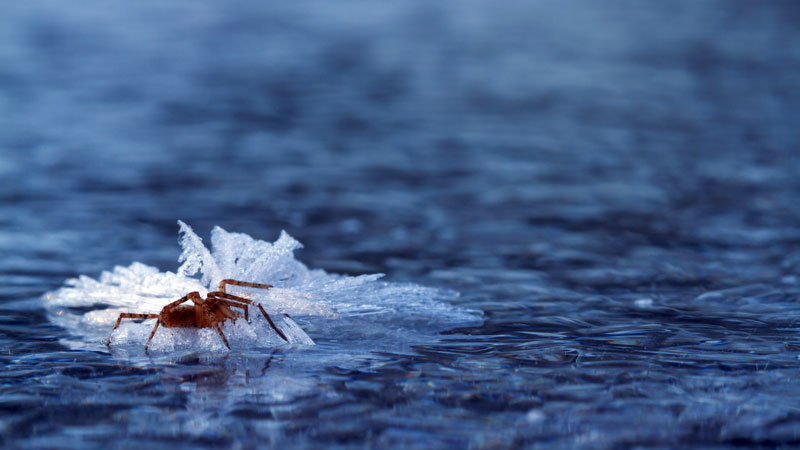 Disclosure: This post may contain affiliate links. This means that at no cost to you, we may earn a small commission for qualifying purchases.
9 shares

One of the most controversial household critters, spiders are both beneficial and (depending on the species) dangerous. But where do spiders go in the winter, when their primary food source has either gone into hibernation or died out?

The answer to this depends upon the species, and sometimes also the circumstances.

Do Spiders Die in Winter?

One of the saddest moments for kids in the older generations was Charlotte’s farewell to Wilbur. As with many spiders, she died as winter approached, leaving behind a clutch of eggs that wouldn’t release her children until the next spring.

For many kids, this tragic scene is the only discussion of what happened to spiders they would be privy to. One common household species which follows the life cycle Charlotte demonstrated is the jumping spider. Like Charlotte, the jumping spider lays an egg sac in the fall, succumbing to the colder temperatures soon after. The eggs actually hatch during the winter, but the young remain safely sealed inside the insulating sac until spring.

Related: How to Kill Spider Eggs Before They Hatch

Wolf spiders, another common household guest, also use this wintering strategy during procreation. As with jumping spiders, they don’t fare as well in the outdoors once frost sets in. However, you may find both of these species running around your home while the chestnuts are roasting if they had already taken up residence.

Do Spiders Hibernate in Winter?

A number of species are unable to withstand the combination of cold and food reduction. These species instead seek out rocks or leaves to hide under and enjoy a form of hibernation. Unlike a lot of mammals, spider hibernation is based upon temperature and not season.

Hibernating arachnids can die in cold enough weather, but their bodies produce glycerol when the temperature drops below a certain point. This serves as a natural antifreeze, allowing the spider to stay warmer internally.

An interesting side effect of this ability is that the spider can wake up on warmer days and go on the hunt for food. As most of their prey will be lethargic or hibernating themselves, the spider can grab a quick meal before going back to sleep as the temperature starts to drop again.

How do Spiders Survive Winter Without Hibernating?

For a large number of species, winter is just a setback. These octopeds have two major ways of staying active when temperatures drop: warmth hunting and torpor.

Most pet spiders are of species which use one of these winter survival methods, while some common garden species may use glycerol production in addition to torpor or warmth hunting to venture out and maintain their webs.

Many common household spiders, such as the deadly brown recluse and infamous (albeit not as deadly) black widow, are known as warmth-hunting spiders.

These arachnids seek shelter where there’s warmth and possibly food. You may find them in your home or garage and even in your live Christmas tree, trying to avoid attention while squatting in your living space.

Torpor, meanwhile, is a state of lethargy which helps a spider conserve energy in cold weather. Tarantulas are a perfect example of common spiders which use torpor to survive. By temporarily lowering their body temperature, these critters can head out on a cool day to hunt.

On a final note for those who allow spiders to cohabitate, you can actually take advantage of web-makers to get an accurate seasonal weather forecast. Spiders can sense when a rough winter is coming and will attempt to prepare a warmer place for themselves and their eggs.

The thicker the cobwebs, the colder it will be in the coming months. As a result, you can examine the density of fresh cobwebs during the fall to gauge whether your heating bills will run higher this year.