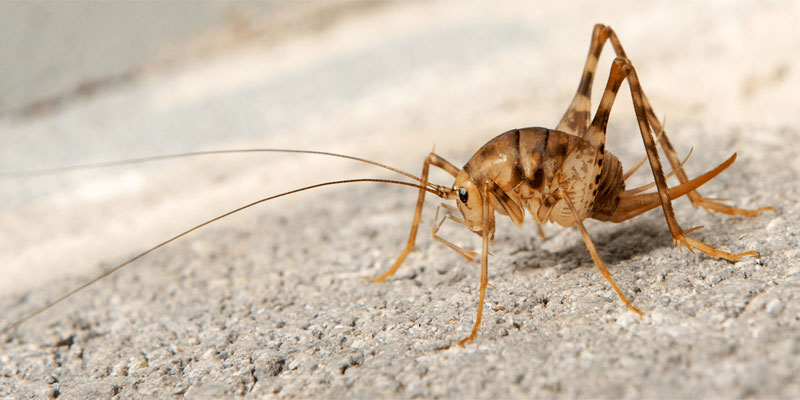 Disclosure: This post may contain affiliate links. This means that at no cost to you, we may earn a small commission for qualifying purchases.
75 shares

Chances are, you’ve run into a camel cricket while exploring the great outdoors, especially when exploring caves. Unfortunately, when they get into your home, they can wreak far more havoc than a true cricket.

Here’s all you need to know about these critters, as well as several ways to get rid of camel crickets and keep them out of your home.

Camel crickets aren’t like the little black ones you normally see. These guys are a light to dark brown and often have dark bands in some places or spots, depending upon the species. One species, the secret cave cricket, is a native of central Texas and has a yellowish grey coloration. Young cave crickets are translucent.

They get the moniker “camel cricket” due to their large, humped abdomen. Their hind legs are also much longer than a common cricket, with the body measuring 1/2 to 1-1/2 inches long and the total adult camel cricket size with hind legs and antennae coming in at up to a massive 4 inches.

The extra long antennae are vital for navigating a dark world, and they lack the sound organs that are normally synonymous with crickets.

Camel crickets are known by a few different names, depending upon your location. The most common pseudonym for these critters is cave cricket, due to their natural habitat.

These are the only crickets that look like spiders earning them the nickname of spider crickets. Finally, they are also sometimes referred to as sprickets or greenhouse crickets in some locales.

As the name cave cricket suggests, these critters are most often found in caves and mines. They can also be found under rotting logs, piles of damp leaves, rocks, or your basement.

A few species have been found living near the permanent ice caps of the Andes, while others live in normally hot climates such as central Texas. As they can be found in countries all over the world, it’s easy to encounter this little guy.

Fun Fact:
Africa has only one species of cave cricket, which stays isolated near the southern cape of the continent.

What do Camel Crickets Eat?

Camel crickets will eat just about anything organic. This includes insect eggs, dead insects (including flies, spiders, other cave crickets), tubers, fungi, roots, etc. This can pose a problem when they wander into your house, as clothing and curtains are organic materials and are likely to be turned into Swiss cheese.

Unlike other insect pests, camel crickets don’t mean to invade your home. They most often arrive by accident from a nearby shelter.

The motives may be escaping from a predator or while foraging for food or water. In some cases, they wander in through cracks in the foundation thinking it’s just another cave or animal burrow.

Once indoors, you could find them hiding in your garage, bathroom, basement, crawlspace, tool shed, or attic. Spotting a cave cricket in one of these locations can be a good indicator of moisture or entry points other, more problematic critters might try to use. 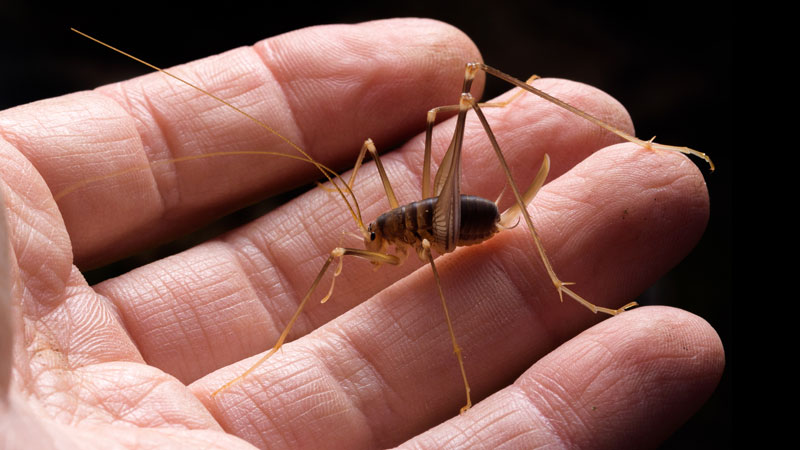 Unlike many other insects, crickets lack the ability to bite and are generally very passive critters. When startled or at risk, the only defense a camel cricket has is jumping.

Another thing that sets them apart from most pests is that they aren’t known to carry any disease, making them one of the safest home invaders in the world.

How High Can a Camel Cricket Jump?

Thanks to their long hind legs and quick reflexes, a camel cricket can jump as high as three feet. This amazing feat of acrobatics can help a cave cricket escape most small predators.

For larger ones (including humans), they’ll often leap towards the source of danger in an effort to startle or scare the predator away.

Why a Camel Cricket Infestation is Problematic

Even though they pose no immediate harm to your family, sprickets can cause incredible damage to your home. They not only eat your clothes, drapes, carpets, and anything else organic they can find, but will poop all over the place afterwards.

Additionally, cave crickets are communal and can usually be found in groups. They live longer than true crickets, so an infestation can explode in scale over a relatively short period of time.

How to Get Rid of Camel Crickets in the House 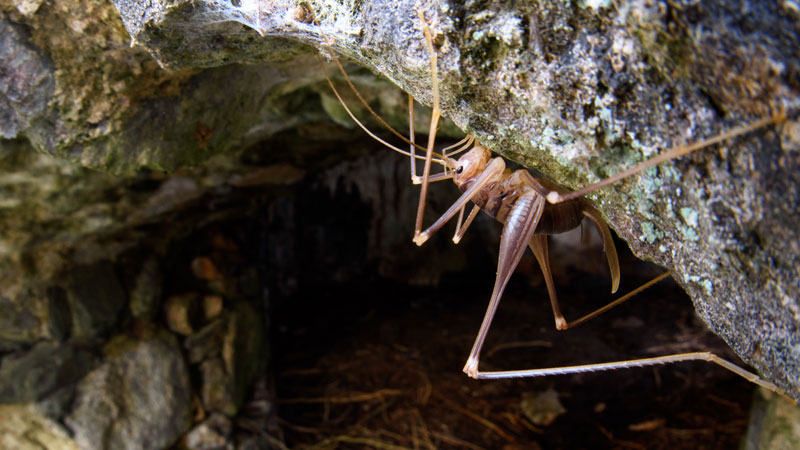 Want to Let the Pros Handle It?
Get a free quote from top pest control companies in your area.
Shop for:  Camel Cricket Control Products

It’s never fun when an unwanted critter suddenly leaps out of a nearby corner. This can be doubly frustrating because a lot of products on the market are potentially dangerous to humans or pets. The following methods are all safe to use around the house.

One of the easiest ways to deal with a camel cricket is to grab several containers and add some Dawn and water to them. Lay them in places where you’ve seen camel crickets.

Dawn is non-toxic to pets in small quantities and will destroy the protective coating on a camel cricket’s exoskeleton. They’ll be attracted to the water and drown because the coating won’t be able to provide buoyancy.

An alternative to soap is molasses. These critters will be attracted to the smell and get stuck. You can use a 1:10 ratio of molasses to water in small bowls and stick these around the house.

A lot of household substances are deadly or repulsive to cave crickets. Here are just a few:

One of our favorite remedies against bugs, diatomaceous earth is a widely available, all-natural product. It’s made up of microscopic diatom fossils which will lacerate an insect’s exoskeleton, destroy the waxy coating, and cause them to dehydrate and die.

This stuff can be rough on the pads of cats and other smaller pets, but it’s pretty easy to place this stuff in areas your pets can’t reach (such as under low-lying furniture). In spots you can’t easily keep the pets out of, just stick an overturned shoe box with a couple small entry holes notched into it over your deposit and stick a couple books on it so help keep the box in place.

You can make use of your Bug-A-Salt to stun these critters. It isn’t powerful enough to kill them, but a good shot will be satisfying nonetheless. You can then drop a jar or kill them before they regain movement.

Another option is to use a bug zapping racket. These work a lot like fly swatters, so you’ll need to be in range. The fun of these is your kids can practice their baseball skills and be rewarded for a hit with a satisfying pop. Just be warned, your kids need to be old enough to know not to touch the wires or they could get a painful (but non-lethal) shock.

Cats are another great way to hunt these critters. Outside of lazier breeds such as Persians, cats can really enjoy hunting cave crickets and will kill and eat any they find. Just be careful not to use any chemical (organic or otherwise) poisons, as the cat may ingest some when eating a poisoned cricket.

How to Get Rid of Spider Crickets in the Garage

You have a lot more leeway with garage infestations, as even an attached garage can be sealed off from your family temporarily. This means methods that may prove dangerous or problematic for your family will work here.

Glue traps are one good way to eliminate cave crickets. You might choose store-bought sticky traps or grab some double-sided duct tape from the tool drawer. Place these along the edge of your walls for a cost-efficient pest-killer.

One method that works pretty well is an electronic rat trap, such as this one. These traps use sensors to detect a pest and then electrocute them. Be sure to get a model that senses moisture rather than heat, as the cave crickets won’t be detected otherwise.

One of these traps can deliver as much as 7,000 volts, which is enough to make the camel cricket explode. Because you’re dealing with voltage, it’s best to keep these traps away from your two and four legged kids. 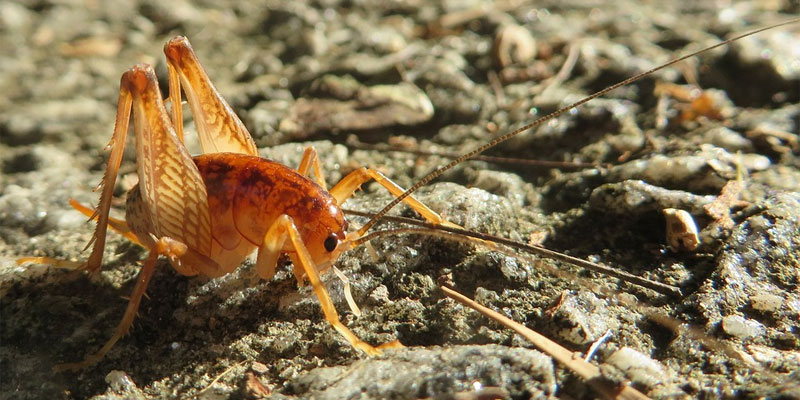 You can do a lot of little things to help prevent a future camel cricket invasion. Many of these preventative steps will also protect you from a wide range of other critters, so it’s good to get as many of these measures in as possible.

Get Rid of Entry Points

Critters (especially bugs) love when you leave an opening for them to squeeze into. Common entry points include cracks in the foundation, holes in your siding, poor caulking or seals on windows and doors, or any other form of damage which leaves a direct opening into your home.

Be sure to periodically check for any such damage and seal them as you go. Not only will these fixes help keep critters such as cave crickets out, they can also lower your heating and cooling bills by keeping your conditioned air inside.

Camel crickets are attracted to sources of water, as are many other critters like pill bugs, rats, and even wolf spiders. By ensuring your home is properly weatherproofed and there are no leaky pipes inside the house, you’ll have taken a major step in making your home unattractive to potential invaders.

As an added bonus, proper weatherproofing and indoor waterproofing will extend the life of your home and much of its contents.

Regular lawn maintenance can eliminate both cover and potential sources of food or water for these critters. Clean up after mowing or raking leaves, and keep any shrubs near your home well groomed to reduce shelter areas.

The less organic material by your outer walls, the better. Remember, camel crickets don’t like to travel far from home, so they’re less likely to invade your’s if it means a long trip across inhospitable space.

21 thoughts on “How to Get Rid of Camel Crickets”