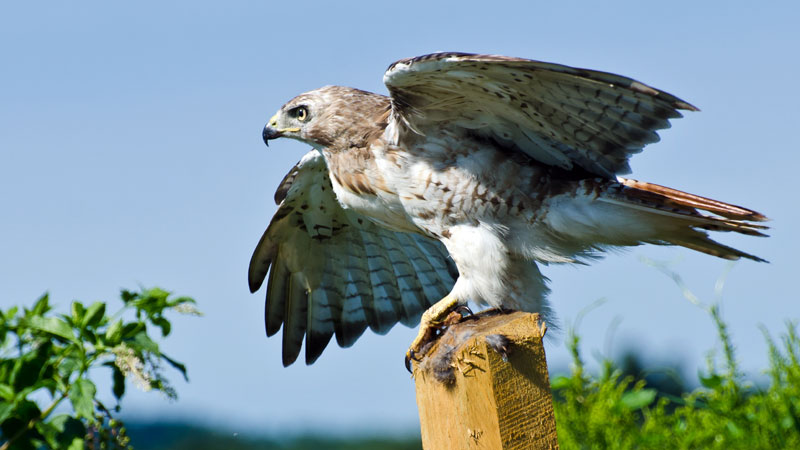 Disclosure: This post may contain affiliate links. This means that at no cost to you, we may earn a small commission for qualifying purchases.
374 shares

Hawks are majestic creatures who have served as both a bane and boon for humans throughout the ages. These raptors can snatch moving prey almost effortlessly from both ground and air.

While falconers train different kinds of raptor for beneficial reasons, wild hawks can be a dangerous foe to ranchers who breed smaller animals such as rabbits or chickens. Knowing how to get rid of hawks usually comes down to scaring them away and making your property less attractive to them.

Getting to Know Hawks

At least 11 types of hawk can be found in the US, with at least 17 species throughout North America. They and their kin are dubbed “raptors” due to the sharp, curved talons on their feet. Depending upon the species, a hawk can range in weight from 4 ounces to 3 ¼ pounds.

Generally, hawks have grey to reddish-brown plumage along the top and lighter brown, yellow, or whitish plumage along the underside. The largest, a rough-legged hawk, has a length of 22 inches and a wingspan of 55 inches – making its width about the same as a child’s height!

Built to kill, a hawk’s beak can tear into meat easily, and their vision is approximately 8 times sharper than a human’s. Hawks are excellent fliers, able to soar for long distances at a time. When in a dive, their speed has been clocked at over 150 miles per hour, making it almost impossible for prey to escape.

What do Hawks Eat?

Depending on the species and circumstances, hawks will eat large insects (such as grasshoppers and June beetles), amphibians, small reptiles, rodents, and other small mammals or birds. Larger hawks have been known to carry away small pets or even baby livestock when wild food is scarce.

How Much Can a Hawk Lift?

As a general rule, hawks cannot carry more than they weigh. When killing a chicken or other large animal, most hawks will slay it on the ground and eat it there. Red-tailed hawks are the most common in residential areas and can lift 4 to 5 pounds – about the weight of an adult rabbit.

While they might appear similar when perched, hawks and falcons have different wing shapes. The hawk’s is broad and best suited for diving from lower perches. Meanwhile, falcons use their sickle-shaped wings to dive long distances for their prey.

The way they kill prey is also different. Hawks use their talons to pierce vital organs, causing a slower and more painful death. Falcons instead use their speed to strike hard and fast, stunning the prey or even killing them instantly.

While close kin, there are a number of important differences between hawks and eagles. The most obvious difference is in size. Eagles are one of the largest birds of prey, while hawks are smaller and vary greatly in size. The powerful build of eagles allow them to snatch prey without landing, while hawks prefer quick strikes and will devour larger prey on the ground.

How to Scare Hawks Away from Your Yard

Hawks can cause a lot of problems when they deem something in your yard to be a potential food source. Thankfully, there are a lot of methods you can use to protect smaller animals in your yard.

What are Hawks Afraid of?

Due to their smaller size, it’s easier to scare hawks off than larger birds of prey. Loud sounds, large and violent gestures (do not try to hit the bird with anything), and using a deterrent will all scare a hawk out of your yard. There are two types of deterrent you can use to keep hawks away. The first type is environmental. Prune branches and ensure the hawk has nowhere to perch. Removing bird feeders can also discourage hawks who are looking for an easy food source.

Physical deterrents are also useful. Building a scarecrow or placing a large owl statue in the yard will fool the hawk into thinking a predator might be present. Just be sure to move this physical deterrent around occasionally, as hawks are highly intelligent and will notice if the deterrent remains stationary for more than a couple days.

A Deer Chaser, while intended to keep deer away, may also work under certain circumstances.

See Also: How to Get Rid of Geese

How to Keep Hawks Away from My Small Dog or Cat

While pretty rare, larger hawks have been known to attack toy breeds, cats, and other small pets. Having an enclosure with a roof can help protect the pet from attacks, although you will still have to watch to ensure the pet doesn’t escape your enclosure.

Do not use extendable leashes when walking your pet in an area known to have hawks. Keeping them closer to you means you can grab your pet and shield it while heading indoors.

Raptor Shields – A good way to protect your pet is to buy a raptor shield. This is a sturdy canvas cover that fits over your pet’s back and straps around the underside. The material shields the back and neck, making it impossible for a bird of prey to get a grip on your pet.

How to Keep Hawks Away from Bird Feeders

Bird feeders can attract a wide variety of wildlife to your backyard. Unfortunately, this also means attractive predators. The following tips will help keep songbirds and other wanted species safe.

Placing the feeder too close to windows can do more harm than good. A panicked bird will likely fly into the glass while trying to escape.

Placing the feeder near bushes or enclosed structures will give sparrows, finches, and other birds a place to hide if a hawk targets the feeder.

Using wire cages around the feeders will allow songbirds to safely get to the food while making it difficult for predators and other large critters from getting at the seed or suet. The downside is that this method will also block cardinals, which are known to protect songbirds from jays and other threats.

How to Keep Hawks Away from Chickens

Three species of hawk have earned the name “Chicken hawk” due to their attacks on chickens. These are red-tailed, Cooper’s and sharp-shinned hawks. The good news is there are several ways to protect your chickens – many of which you never thought of.

Having a raised coop, deck, or shrubs that your chickens can hang out under makes for both safe and happy fowl. They’ll often congregate in the shade to cool off, but will also have a place to hide if a predator appears.

A large breed dog that gets on well with your chickens can be an excellent deterrent from not only birds of prey, but other predators. Just make sure not to keep a schedule when letting the dog out if it’s an indoor dog. Letting them out at random will ensure the hawks remain cautious.

Believe it or not, chickens are pretty intelligent, and roosters can be very protective. Whether you raise free-range chickens in an urban or rural setting, roosters will scan for birds of prey and guard chickens actively as long as a potential threat is present. Not all roosters are excellent guards, so try to get one that exhibits protective qualities.

A good scarecrow can protect against a wide range of crop-killing pests, but can also protect against birds of prey. You can also use an owl statue. Just be sure to move them around every few days, because hawks do pay attention and pick up on tricks quickly. Note that it’s best to use these deterrents alongside other methods for the best results.

While some species, such as crows, love to collect shiny objects, hawks and other birds of prey will see a flash of light and think it’s food. Flying into a pie tin is very frustrating, so hawks may eventually look elsewhere for less metallic meals.

Can I Shoot a Hawk Attacking my Chickens?

Most birds of prey are protected in the US by Federal law due to their vital role in controlling other pests. Injuring or killing a hawk can lead to fines or worse. Note that there are exceptions for migratory birds of prey merely on the “Do Not Disturb” list, but it requires a special permit which can be difficult to obtain.

How to Attract Hawks (For Other Pest Control) While we’ve spent most of this article talking about hawks as pests, there is another side to the coin. Many cities have imported red-tailed hawks to help control the rock dove (AKA pigeon) population. You can also make use of local hawks to take care of a variety of pest problems.

Attracting hawks to your garden can help eliminate all sorts of garden pests, from rodents to some insects. Sure, you will have to give up attracting songbirds, but the payoff might be worth it. Providing ample nesting and perching areas will give the hawks a spot to attack from, and keeping noisy people or animals out of the garden can help make the garden more attractive.

Having a section of your yard with tall grasses or other flexible ground cover will encourage all kinds of mice and rodents to congregate in those areas. Hawks make for fantastic mouse repellents. You can also build nesting boxes to encourage hawks to stick around. Just make sure to have a bird feeder or other source of water available.

60 thoughts on “How to Get Rid of Hawks”