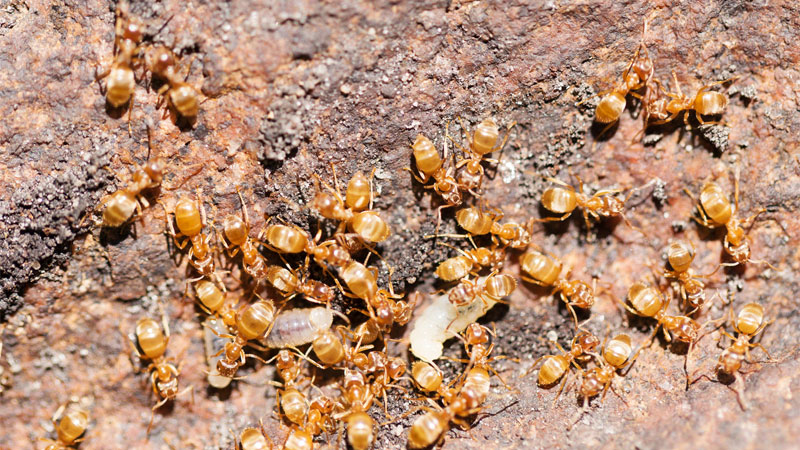 Ants are one of the most prolific critters on the planet for a good reason. They’re organized, social, and able to solve simple problems by leaving scent trails for one another. But this also makes them one of the most frustrating household pests.

Depending on the type or species, ants can have relatively small colonies of a few hundred or less – or they can have massive colonies of billions that can span thousands of miles, such as the dreaded Argentine ant.

But one particular ant has an especially frustrating reputation for being hard to get rid of and out of your home – the grease ant.

Getting to Know Grease Ants

Grease ants (Solenopsis molesta) are more commonly known as thief ants, but both names are very apt descriptions. These tiny critters can get in when other ants can’t, making them especially annoying to deal with.

The good news is that once you know a little more about them, grease ants are actually not as difficult to get rid of as their reputation suggests.

These tiny pests are some of the smallest ants you’re likely to run into, measuring a mere 1/16 inches long. They range in color from a shiny yellow to dark brown and have a smooth thorax with two nodes (if you get close enough to examine one, that is).

As with many ants, they have a habit of curling up when they die.

How the Grease Ant Got Its Name

Grease ants feed primarily on proteins, which grease being a prime draw due to how easily this source of fatty proteins can be transported back to the colony. However, any greasy or oily food will do, and they’ll gladly harvest dairy products, meat, seeds, and even other insects – which brings us to their other name.

Like thieves in the night, grease ants have no qualms invading the colonies of other ants. Once there, they’ll find the nurseries and steal the larval and pupal stage ants from that colony. They’ll also steal any food they happen to find.

Once back in their own colony, the little thieves will devour their takings, including the unfortunate young. This is why they’re also commonly called thief ants.

Where Do Grease Ants Live?

Grease ants form colonies that range from a few hundred to a few thousand inhabitants, including multiple queens. They’ll form these colonies practically anywhere – including inside the colonies of other ants! They can also build access tunnels to nearby colonies to make stealing food easier.

Another interesting fact is that grease ants don’t live in a single centralized colony, but instead a network of satellites which each have their own queen. This not only gives the grease ant colony a much greater foraging range, but it helps protect the colony from disaster, since one or more satellites might survive where a single central colony would be wiped out.

Outdoors, you’ll likely find these little guys making their homes under rocks, in sidewalk or foundation cracks, in the ground, or even in rotting wood.

Inside, the possibilities are almost endless, with a favorite spot being behind baseboards or in walls. However, they’ll set up shop ion any surface they can burrow into.

The good news is that grease ants tend to follow the food, so the most likely spot in your home for a nest will be the kitchen. Bedrooms or common living areas where food is sometimes eaten, come next. It’s extremely rare to find them in an attic or basement, though.

Most people associate ants with sugar, but some ants also love protein. In the case of grease ants, sugars are of little concern. Instead, fatty, greasy goodness is all they care about.

Other ants, including carpenter ants and fire ants consume both sugar and protein.

Grease ants prefer to use their stinger when threatened. However, these critters are so tiny that you’d never notice them trying either.

While not nearly as dangerous to your health as cockroaches or flies, grease ants can still carry contaminants from one spot to another, spreading a lot of food-borne diseases. Even worse, they’re so small they an easily get into sealed packaged foods and contaminate them.

The good news is that these ants tend to travel in more-or-less straight lines between a food source and the colony, so any contamination is usually confined to a small area.

This often sounds like a stupid question until you see one with wings. Workers, of course, can’t fly, but the male drones and fertile queens can.

If you see a grease ant with wings, be ready to deal with their mating flights and a possible population explosion in the coming months.

These two species are easily confused, although pharaoh ants (Monomorium pharaonis) have a reddish hue and black abdominal markings. The other major difference is that pharaoh ants prefer sugars while grease ants prefer grease.

If you’re having trouble dealing with grease ants, a case of mistaken identity is probably why. Grease ants are a specific species which feeds primarily on grease and other proteins. They form smaller colonies but are harder to deal with because a lot of the traps out there are geared towards sugar ants.

The problem is, grease ants ARE sugar ants – but at the same time, they’re not. That’s because the term “sugar ant” is a complete misnomer. It doesn’t represent any particular species but instead is used to describe ANY ant that invades your home.

While most of these “sugar ants” actually do feed on sugars, there are plenty of species (such as grease ants) that don’t.

Various pests such as Argentine ants, acrobat ants, ghost ants, and even pavement ants all count as sugar ants, yet they have very different shapes, sizes, colorations, social structures, and some are even groups of species themselves while others are a specific species.

How to Kill Grease Ants

Normally, we’d spend a lot of time telling you how to repel a critter, but grease ants are a bit different. If you don’t kill the satellites, the infestation will just come back.

Also, while exclusionary tactics will work to a point, these ants are so tiny they can get in through the tiniest of cracks.

Well yes… and no.

Your average store-bought bait trap is often geared towards more sugary baits. Unfortunately, this poses very little interest for grease ants, so they’ll usually just ignore the bait traps altogether. But that’s not to say they don’t work at all.

Simply put, if you want a trap that will kill grease ants, you have to think of fair foods. Choose a base for your bait that’s greasy, oily, or even fried (but do a quick fry, as fully cooked food won’t be as attractive).

Some great bases are bacon grease, lard, or peanut butter.

One of the best homemade ant baits uses borax (or boric acid). Just mix equal parts of the borax and your bait base. Be careful not to mix too much, however, as this will end up repelling the ants.

Place your bait on bits of wax paper and lay it along the ant trail. The little fat-eating ants will take the bait back to their nests where it will destroy the digestive tracts of any ant that eats it.

If you’d rather use a store-bought bait, you’ll need to make it more attractive first. Just mix one drop of grease or oil to every five drops of liquid bait and put it on some wax paper along the ant trail. Remember, protein ants want protein, and most commercial baits are geared more towards sugar lovers.

Various sticky traps can have some degree of success as well. Try adding a couple drops of bacon grease onto a glue strip or similar trap to attract the grease ants and lay it along their trail.

They’ll get stuck trying to get to the food and die, although some may eventually figure it out and reroute the column. Also, note that this method won’t kill the queens, so it shouldn’t be used on its own.

This isn’t advised for use indoors, but can be somewhat helpful in combatting an outdoor colony. Just be warned that you can kill a thief ant with homemade or chemical sprays, but it won’t affect the colony itself.

Follow the ants back to their nests and plan your attack. The best method is to flood the colony using liquids. Just be careful using them around plants, as they could be harmful to root systems. A few great options include:

Remember that a thief ant colony has several satellite nests, so you’ll have to find each nest and deal with it separately.

See Also: How to Quickly Get Rid of Ant Hills