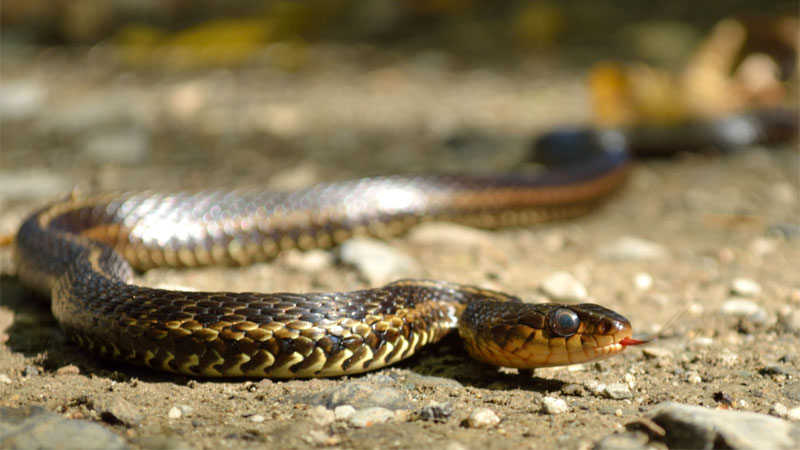 If you’ve ever had a garden (or even just a back yard), there’s a good chance you’re going to have an encounter with a garter snake at some point. While pretty much harmless, these little guys can be pesky, but there are ways to get rid of them without resorting to violence.

The good news is that garter snacks are very different from what you might think by looking at them. Here’s everything you need to know regarding garter snakes and dealing with one in your home or property.

Getting to Know Garter Snakes

Why Are They Called Garter Snakes, Anyway?

This has been a question haunting people since Carl Linneas identified the eastern garter snake (Thamnophis sirtalis sirtalis) in 1758.

This name is curious because it literally translates to “bush snake like a garter”. However, whether or not the esteemed botanist intended the name to refer to the striping and how it resembled a garter strap is unknown.

It’s entirely possible the association with garters was accidental or possibly even based on a Native American pointing to a garter when describing the snake to Linneas. Sadly, this is just another mystery that may never be solved.

How To Identify a Garter Snake 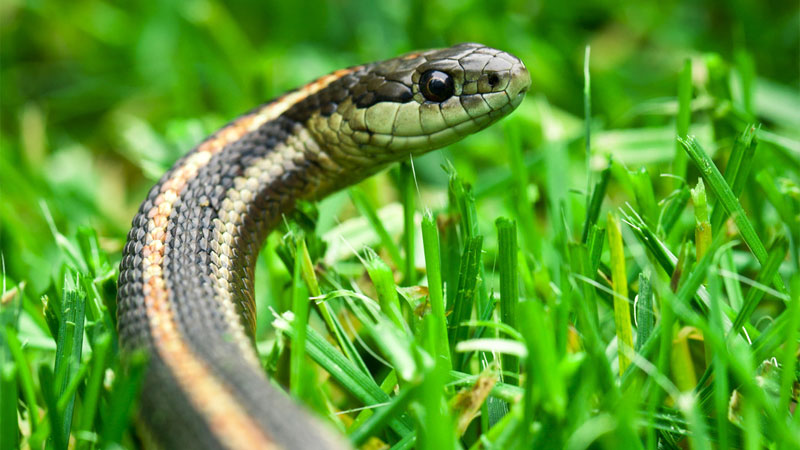 With 35 species and subspecies, the Thamnophis genus has a lot of variety, making it difficult to give any single description. However, garter snakes tend to share many or most of the following traits:

There are a few ways to immediately tell if a snake might be venomous. These dangerous snakes have clear markings, such as the red and yellow bands of a coral snake, the diamond pattern of a diamondback, or the rattle of a rattlesnake.

Also a non-venomous snake’s head will be round and often spoon-shaped, whereas venomous snakes (like a rattlesnake or copperhead) tend to have more angular or triangular heads.

Of course, garter snakes and many other non-venomous species have learned to flatten their bodies to give the appearance of a venomous snake, so when you see a snake with such a shape, always treat it as you would a venomous snake.

The final difference is in the eyes. Don’t try to get too close to a snake, but if you have your phone, you can use the zoom to check the pupil shale. Venomous snakes have slit-shaped pupils while non-venomous snakes have round pupils.

Can Garter Snakes Bite? And Are They Venomous? 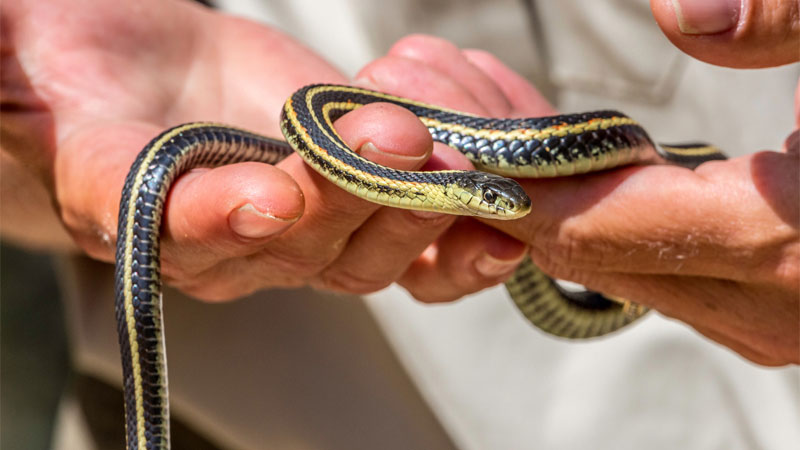 While not easily visible, garter snakes do have teeth and can bite if threatened. However, the teeth are quite small and while the bite may hurt, it’s harmless.

In fact, it wasn’t until quite recently that scientists discovered that garter snakes produce venom. The dosage is so weak that to this day, garter snakes are considered non-venomous.

Garter snakes are native to North America and can be found throughout most of the continent with the exception of the norther half of Canada where it’s too cold for reptiles to function. Due to their need for water, they’re not found in the desert, but are well-adapted to forests, grasslands, and wetlands.

Species in the eastern half of the continent are less aquatic than those in the western half. However, all species prefer to be near water.

Garter snakes are incredibly good swimmers to the point that they are often confused with their close relatives, the water sakes (Nerodia genus). This similarity, along with others, has resulted in several species being swapped back and forth between the two genera.

There are three things on the average garter snake’s menu: amphibians, insects, and small mammals such as mice. 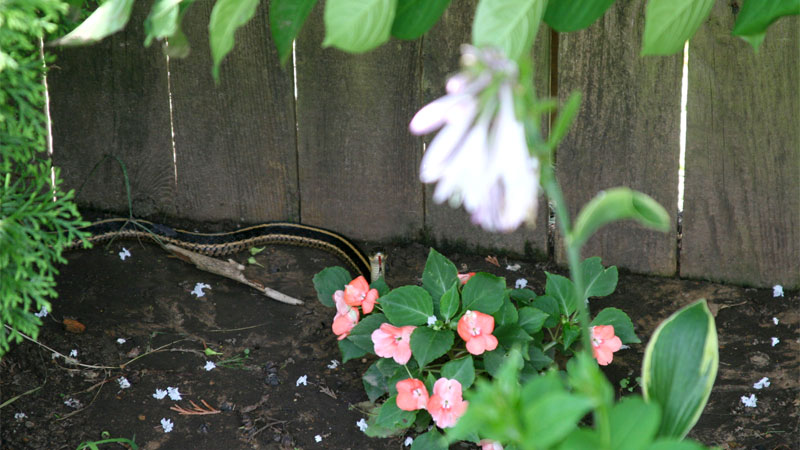 Garter snakes may try to hide, but they’re not very good at covering their tracks – literally and figuratively. For example you might discover snake tracks in mud or dirt.

They also have a strong, nasty odor that can betray their position. Other less common signs of garter snake activity include shed skin or feces that may have bits of the snake’s last meal in it.

Why Are There Garter Snakes in My Home?

If you see a garter snake in your home in winter, it might be coming in for the heat. Garter snakes are generally solitary but will huddle in large groups for warmth while they hibernate for the winter. So if a solitary snake can’t find a huddle, he’ll settle for your home.

Another common reason for garter snakes to wander in is if you have an infestation on your hands. You might not notice those mice in your walls, but the snake knows they’re there and will sneak in for an easy meal.

These shy little critters prefer to remain hidden unless there’s a nice spot for basking. Outdoor hiding spots include tall vegetation, under rocks, crawl spaces under decks, or wood piles.

And if they get inside your home, it’s usually into the basement. On some occasions, an invading garter snake will wind up in your kitchen or bathroom, attracted by the moisture.

While they aren’t likely to scale a building, garter snakes are excellent climbers if the surface has enough texture.

They can raise themselves high enough to scale stairs as well. However, this isn’t something they do for fun and you’ll generally only see a garter snake doing this if there’s food or safety involved.

When allowed to hang out in your garden, garter snakes will hunt down a wide range of pests without harming your plants. They won’t harm your plants and prefer to stay out of your way when possible.

While they are also known to feed on beneficial insects, this is far less common since snakes are more likely to go after food near the ground. 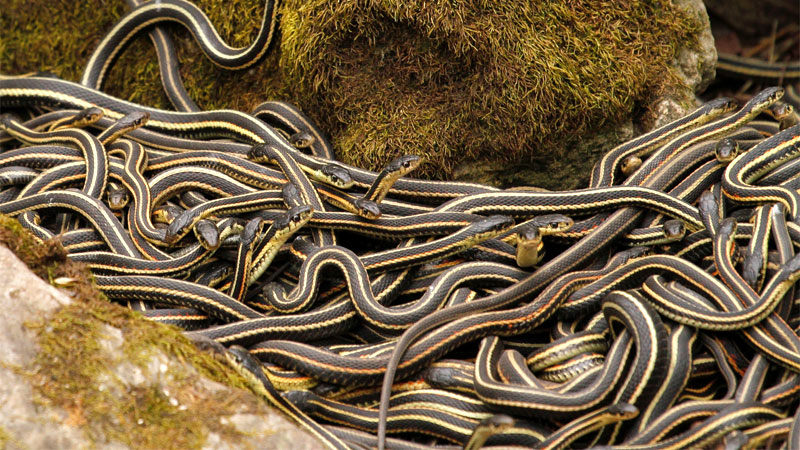 Garter snakes communicate through a range of pheromones, allowing them to track other snakes, as well as mate. Interestingly, male garter snakes have pheromones very different from females, yet the males in some species can actually mimic a female’s hormones to trick other males into sharing body heat.

Unfortunately, these pheromones also mean that garter snakes leave behind quite the unpleasant odor. They can also secrete the smell anally as a defense.

Here are a few other potential downsides:

Did You Know?
In Japan, calling someone a snake is the highest compliment. Snakes are extremely loyal and fashionable but also unforgiving if crossed.

Unlike water snakes, which are so similar even the experts can mix them up, ribbon snakes have a few differences from the garter snake.

They have a much longer tail and smaller head. Their extra thin bodies also have a different stripe pattern.  A little white spot is in front of each eye. However, their other habits and foul odor are nearly identical to that of a garter snake.

Getting Rid of Garter Snakes 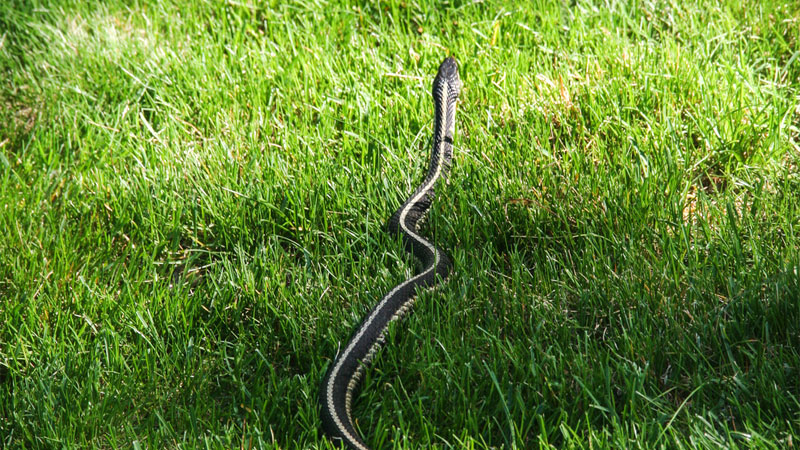 While a garter snake is pretty much harmless, you don’t want to risk having a couple hundred of them hibernating under your porch come October. The good news is that they’re fairly easy to get rid of regardless of your reason for doing so. The bad news is that smell tends to stick around and is tougher to eliminate than skunk musk.

One thing you might not be aware of is the fact that there are several natural predators for garter snakes you can easily attract to your property to keep the population down.

Nowadays, more and more urban and even rural environments have been importing predator birds to help deal with the explosion of rock doves (AKA pigeons), and many of these birds will actively go after garter snakes.

Raptors and other snake-eating birds you can attract include:

Be warned that some of the birds on this list can also become pests in their own right, so employ with caution. For example, raptors (eagles, falcons, and hawks) can be a threat to small pets, so don’t invite them if you have toy dogs or small cats.

However, the big shocker for most people is to learn that chickens are a predator species. Chickens not only eat snakes, but they’ll go after lizards, mice, rats, and even small birds! Just be warned that the garter snakes can go after chicks, so only let the adults out to hunt.

You can also employ a number of other critters to your cause, although these again should be used with caution since some are pests in their own right:

Getting Garter Snakes Out of the House 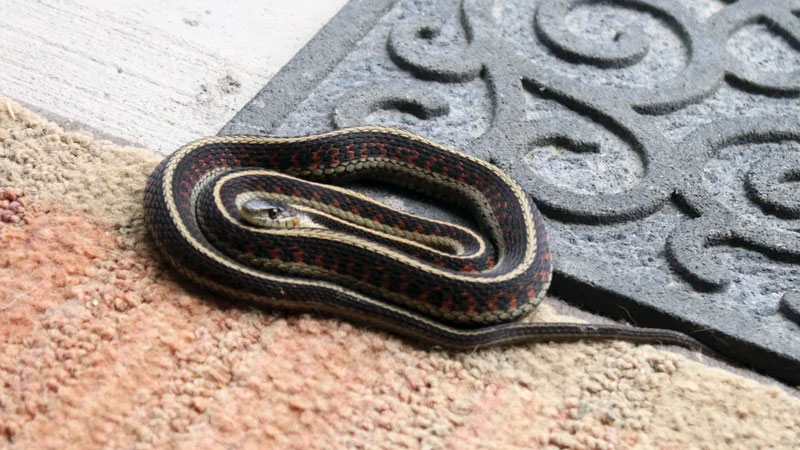 A humane bait trap is perhaps the best way to go. The trap will need either live bait or may include bait if bought. Be sure to camouflage the trap so the snakes won’t avoid it.

While you can use these traps outdoors as well, they’re perfect for the home because you won’t have to handle the snake. Be sure to relocate the little guy somewhere a few miles away before releasing him.

Myth Buster: Glue traps and live traps may be effective, but mothballs are an old wives’ tale and don’t phase garter snakes.

Once the snake’s gone, be sure to do a thorough inspection of your home’s exterior and seal any possible entry points such as holes, crevasses, putting mesh over vents, etc.

Known as a hubernacula, these dens are usually found somewhere warm and secluded such as under a porch or even in an attic. Remove the snakes one-by-one (this can take a while) and put them somewhere far from your home.

You may wish to wear gloves (so you won’t smell after) and keep in mind the cold can kill garter snakes, so plan your relocation carefully if you want to keep them alive. Be sure to seal any entry points to the den afterwards.

Chasing Garter Snakes Away (and Keeping Them Away) 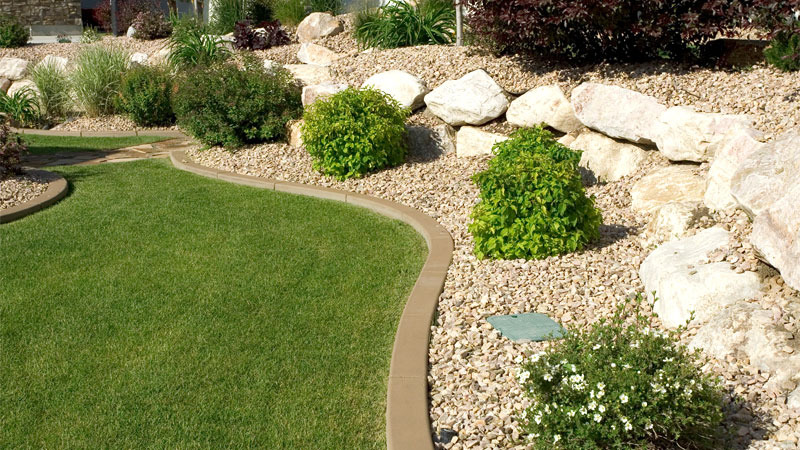 Garter snakes want the same things as most critters do: food, water, warmth, and shelter. Thus, the trick to keeping them off your property is to deny them these amenities. You can also usually chase a snake out in the process.