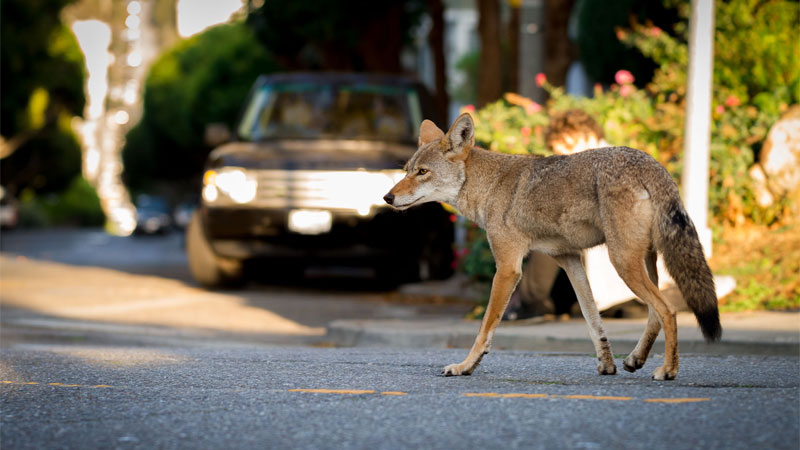 Dogs have a very duplicitous reputation among humans. Some, such as domestic dogs, are well-loved and extremely loyal. Others, such as wolves, jackals, and coyotes, are considered nuisances or even threats. That’s not to say that wild dog species haven’t been pets or loyal companions on occasion.

Unfortunately, while the reputations of wolves and jackals have improved over time, the reputation of coyotes has gotten worse. This is due in no small part to their hit-and-run tactics on farmers throughout North America.

However, one thing is true, and that is the fact that coyotes can be dangerous if encountered and should be discouraged from setting up home on your property. Keep reading to learn more about how to get rid of coyotes and keep them away.

Getting to Know Coyotes

Mention a coyote and most Americans will picture a scraggly brown dog with a taste for road runners and a habit of falling off of cliffs. But this wasn’t always the image associated with this species of canid.

Knowing how to identify a coyote is important because they’re intelligent critters that have become more aggressive over the past few centuries in response to the hostility humans began showing and the loss of habitat.

A Coyote by Any Other Name

Over the centuries, coyotes have had a lot of nicknames. The scientific name is Canis latrans, and there are currently 19 known subspecies. Their behavior and appearance have led them to be called American jackal, brush wolf, and prairie wolf at various points in history.

According to a 2016 study, coyotes became their own species as recently as 6,000 years ago, and appear to be descended from the Tibetan wolf. 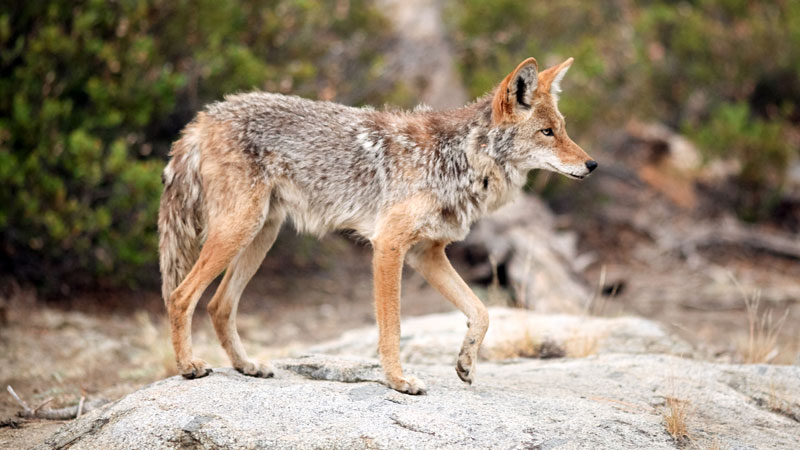 This coloration varies greatly based on their location, with desert coyotes having less black and white than mountain-dwelling breeds.

What Do Coyotes Eat?

Coyotes are primarily carnivores, preferring fish, birds, and smaller mammals such as mice, rats, rabbits, and squirrels. They’re active predators of red foxes and will attack livestock. When meat is more scarce, they’re known to supplement their diets with fruits, vegetables, and grasses.

They have even been known to eat domestic feed or even animal poop during harsh winter months.

Coyotes rarely create their own dens, instead choosing to take up residence in small caves, hollowed logs, or abandoned dens. Fox and badger holes are common starting points for a coyote den and are simply enlarged to suit the coyote’s needs.

A den is continually expanded upon until pups are born, and will contain a number of escape tunnels and passages. Once built, a den will often be reused in subsequent years.

Coyotes are also known to make their homes in hollowed, undisturbed spaces, such as under porches or abandoned structures. They will relocate their pups if the den is disturbed or develops a flea infestation. 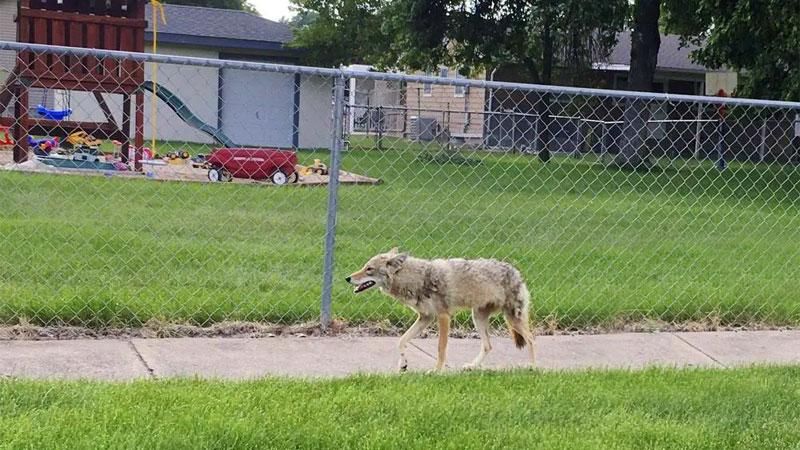 Coyotes were once a respected critter, with Native Americans considering the Trickster Coyote to be cunning and playful. However, he was also prone to getting himself into trouble.

In Mesoamerica, the coyote grew to become a symbol of military prowess for its tactics, while in more northern climates, it was a well-loved and rarely underestimated force of nature that played a pivotal role in culture and folklore.

When Europeans and Africans began settling the continent, they brought with them a much different view. To them, the intelligence of coyotes compared to domestic dogs and their interest in livestock made them a distinct threat.

Europeans already had negative views of wolves, and they considered the tactics of coyotes to be cowardly and dangerous.

In more recent years, ecologistes have begun to understand the important natural role of coyotes better. Unfortunately, unlike wolves and jackals, the negative stigma surrounding coyotes had failed to improve and they remain one of the most feared and hated of all canid species.

It can be difficult to tell a coyote from a stray dog at a distance. Coyotes have longer snouts and ears, as well as protruding upper canine teeth. The easiest way to distinguish them is their straighter, more oval-shaped tracks.

Coyotes and American wolf species are actually very closely related, with the latter containing coyote DNA and a limited ability to produce coywolf offspring. However, wolves are larger than coyotes and tend to have a much tighter pack structure.

The head has the biggest physical differences, with the leaner-faced coyote having a larger braincase and longer ears than wolves. When on the move, coyotes keep their tails down, while wolves tend to hold them outwards.

Getting Rid of Coyotes 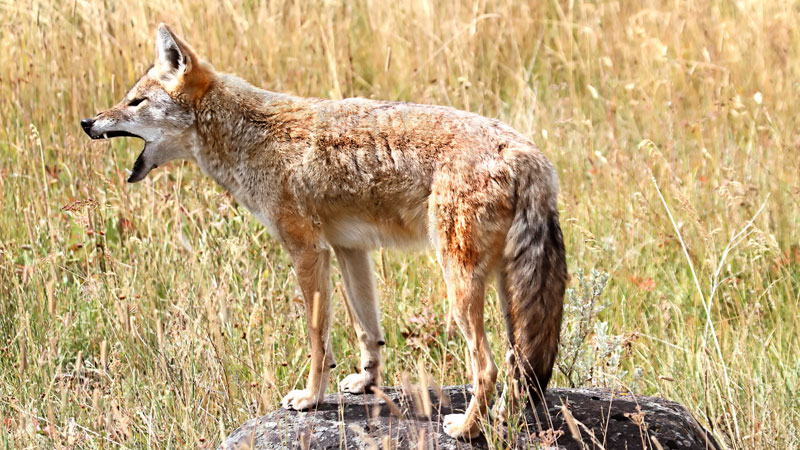 Getting rid of a coyote once it’s deemed your property as safe can be a very difficult task. It’s usually best to discourage them actively in areas they’re known to reside.

However, there are a few ways you can get rid of them once they’ve made their way onto your land.

Be sure to check on whether use of traps is legal in your area or if it can be done with a permit or by professionals. Traps can be purchased or rented and are a great solution when relocation is the goal.

Note that the trap must be carefully concealed and baited, as coyotes are highly aware of their surroundings and will shy away from anything unfamiliar. Successfully trapped coyotes should be handled with extreme care and released as far from your home as possible so they won’t find their way back.

As much as we prefer no-kill solutions for most critters, some areas actually have laws which either permit or encourage the killing of coyotes.

Be sure to check with local guidelines before attempting to kill a coyote and follow any requirements carefully. You will also want to make sure you have a positive identification so you don’t accidentally shoot someone’s dog.

How to Keep Coyotes Away 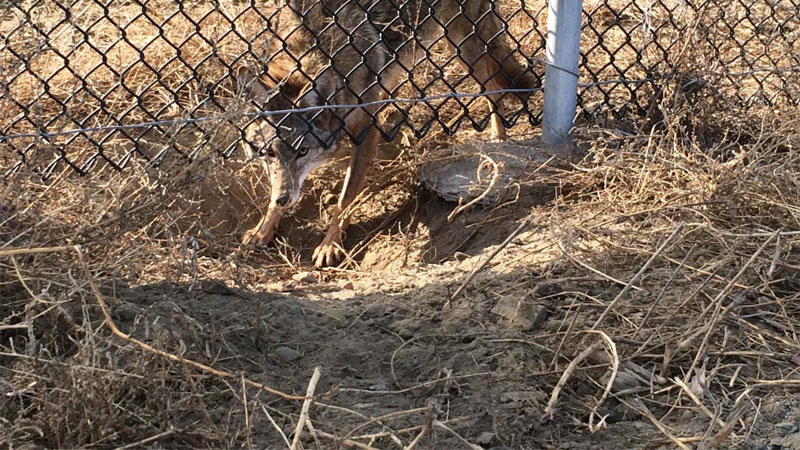 A coyote sighting in the neighborhood shouldn’t be taken lightly. Their loose pack structure means it could be a solitary coyote or part of a larger pack.

Coyotes will usually avoid humans, but may become aggressive if provoked. Try using deterrents to encourage coyotes to keep their distance.

Coyotes will have a greater chance of entering your backyard if you leave open trash containers or pet food out. They might initially go after food sources when nobody is around, but will slowly become more bold.

Eventually, a coyote can lose its fear of humans if it sees your property as a stable source of food.

You should also be wary of feral cat colonies or allowing your pets to run loose in an area where coyotes have been sighted. They see these smaller animals as potential prey and may attempt to hunt them.

Using a tall fence can help discourage coyotes from entering your property, especially if there’s a bit of barbed wire along the top.

However, they’re decent jumpers and avid diggers, so you will need to make sure the fence extends a decent amount both above and below ground if you want it to be truly effective.

Unlike many other species, coyotes don’t seem to be discouraged by electrified fences. 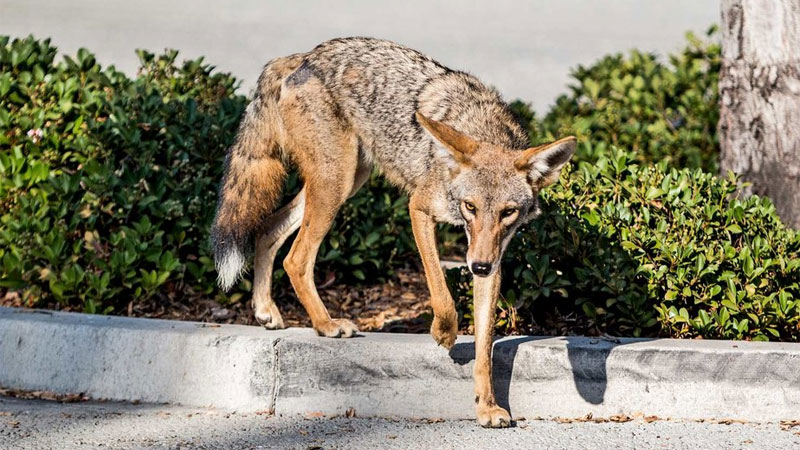 Coyotes are survivors, meaning they won’t knowingly step into a situation where there’s danger. You can take advantage of this by using decoys that have lights and sounds.

If you live in the countryside or have livestock in coops or barns, you can place a radio inside and set it to a talk station. The coyotes can hear even a low volume a mile or more away and will be more likely to avoid the area.

Will Human Urine Keep Coyotes Away?

Human and wolf urine have both proven to be effective deterrents against coyote incursions, although your neighbors might not appreciate you going around peeing on your property.

Instead, soak some sponges in ammonia and hang them around the perimeter of your yard. You can also dump your vacuum cleaner canister or bag around the border of the property, as the skin cells and hair your Hoover collected will often be detected as a sign of human presence.

Will Animal Control Do Anything About Coyotes?

Animal control agencies will usually leave coyotes alone unless they become a threat, since removal of one or two coyotes won’t necessarily get rid of an entire undetected pack in the area.

You should report signs of an aggressive coyote or one which has lost its fear of humans immediately, however. Most animal control agencies in areas known to have wild dogs will have a plan of action in place.

How to Defend Yourself Against a Coyote

It’s always a good idea to carry a can filed with small rocks, a whistle, or some other noise-making object if coyotes have been spotted in the area.

When encountering the coyote, noise is your greatest ally. Shake the can, blow your whistle, shout, or make other loud sounds to scare the coyote off. Using pepper spray or throwing rocks or other objects has also been known to work, but may provoke the coyote into defending itself.

Under no circumstance should you ever turn your back on a coyote or try to run. It will see you as prey and be more likely to attack. Showing aggression without attempting to physically engage the coyote is one of the best methods of avoiding an altercation.