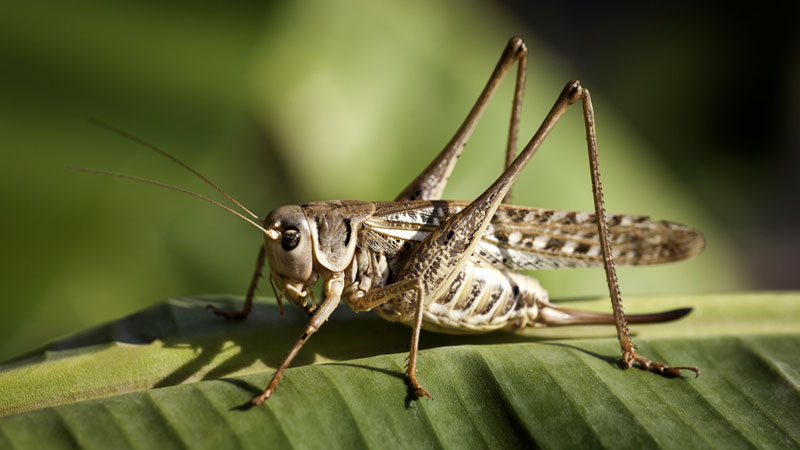 Disclosure: This post may contain affiliate links. This means that at no cost to you, we may earn a small commission for qualifying purchases.
1154 shares

Grasshoppers are quite common in the summer. Some kids love catching them and watching them “spit tobacco” on their hands. Others just enjoy chasing a grasshopper so they can watch those amazing jumps.

But for adults, grasshoppers are quite the nuisance. These garden pests will defoliate your flowers and crops at a surprising rate. So how do you know when a grasshopper invasion is happening, and how do you get rid of grasshoppers when they take up residence?

Grasshoppers are part of a larger group of insects, and may be mistaken for locusts, crickets, or other related species. The following section will help you know if you’re dealing with a grasshopper or a relative.

Grasshoppers tend to measure between ½ inch and 2 ¾ inches. While a few have brightly colored wings, most tend to be brown, grey, or green to help them hide from predators. They also have large, easily spotted mouth parts and long hind legs to aid in jumping.

There are two pairs of wings on grasshoppers, with the front pair being thin and tough, while the rear pair is more flexible and wide to facilitate flight. As a general rule, grasshoppers are a solitary species and rarely travel far from where they hatched. While all grasshoppers and many of their relatives belong to the order Orthoptera (meaning long wing in Latin), they were subdivided in 1939 to two suborders, Caelifera and Ensifera. The first suborder have short antennae and are commonly referred to as short-horned, while the second are “long-horned”, with antennae longer than their wings and/or body.

In the US, there are 660 species of grasshopper, 630 of which are in the family Acrididae, and the rest divided into four other families. There are approximately 11,000 species worldwide.

After a complicated mating ritual in which the male rides the female, the female will lay up to 25 clutches of 10-60 eggs within a few weeks. The clutches are laid in the summer, and eggs usually hatch the following spring, although some species will hatch early and the nymphs live through the winter.

Unlike many species of insect, grasshoppers and their kin only have three stages and have a lifespan of only one year: egg, nymphs, and adult. Nymphs resemble miniature versions of the adult, but their wings are underdeveloped and non-functional. Eventually, they will molt into adults and gain the ability to breed and use their wings.

This is a slightly complicated question. Some species of grasshopper have underdeveloped or absent wings, forcing them to rely upon powerful jumps to get from one place to another.

Conversely, the majority of grasshoppers can fly and do so remarkably well in a pinch. In 2012, a grasshopper was caught hanging out on the tower camera atop the Bank of America Plaza, which is approximately 920 feet above ground! For the most part, however, these grasshoppers only use their wings to glide after a good jump.

What Does a Grasshopper Eat?

Grasshoppers are omnivores. Usually, they feed upon foliage such as leaves and grass, with some species preferring specific plants. Jagged holes are a good indicator that a grasshopper is to blame. In harder times, grasshoppers will scavenge dead plant matter or even feed off of dead grasshoppers and other insect corpses.

On a more curious note, grasshoppers have been known to chew holes through window screens on occasion, although they generally don’t consider metal a food source.

There are quite a few species of cricket, and some can be mistaken for grasshoppers. There are a few easily-spotted differences, as well as those which require close examination.

One key difference is that grasshoppers are primarily diurnal (active in the day) while crickets are nocturnal (active at night). Their coloration also reflects this difference, with most crickets being brown or black to help them blend into shadows.

You can also tell a cricket because their chirping is loud and can be heard for most of the night, while it is less likely to hear a grasshopper, even during the day. You probably won’t confuse a grasshopper with a camel cricket though.

When alone, it can be almost impossible to tell a solitary locust from a grasshopper. However, locusts are social and will group together to form swarms.

As they do, their bodies undergo changes to make them more aerodynamic. Swarms of locusts can fly long distances and destroy entire crops during their migration. Getting rid of locusts is even more critical than grasshoppers.

Katydids are a close relative of the grasshopper, although they actually belong to the Tettigoniidae family. Theit long antennae make them more similar to long-horned species than short-horned.

How to Kill Grasshoppers In the Garden (All Natural!)

Getting rid of grasshoppers using chemical means can be tricky, as they become more resistant to pesticides as they age. Insecticides containing acephate carbaryl or permethrin are most effective, although they may not actually kill the grasshopper until it’s in another yard. Natural remedies are not only plentiful, but far more effective.

Females prefer to lay their egg clutches somewhere they won’t be disturbed. Thus, tilling the ground around September will discourage them and leave them to pick somebody else’s yard for their nesting ground. This also provides the added bonus of turning grass and other tilled ground cover into compost, making the soil richer for next year’s growth.

An unusual but effective solution, all-purpose flour will become sticky when grasshoppers try to consume it, causing their mouthparts to gum up and starve the critters. Simply sprinkle a thin layer on the leaves of your plants, and make sure it isn’t another type of flour (many kinds of flour contain salt, which can harm your plants). A lot of common bird species hunt insects and consider grasshoppers to be a treat. A few bird feeders will bring them in and they’ll snack on your pests for dessert.

One particular species of bird you may not have considered is the chicken. Believe it or not, many towns and even cities offer permits to keep chickens as pets. They can actually make pretty good pets and will snack on any insect they can find. As an added bonus, a fertile hen will provide fresh eggs.

An eco-friendly insecticide, Ecobran uses carbaryl in a special blend that targets orthoptera insects without harming birds or beneficial insects. This makes it an excellent garden buddy, especially when used in conjunction with complimentary gardening.

If you have a pond in your yard, consider investing in a couple amphibians. Frogs and toads love to eat insects and will act as a natural defense against all sorts of nasty bugs. Just make sure later you also don’t want to get rid of frogs themselves.

If you don’t want frogs, lizards are another option as they love to munch on grasshoppers as well.

Spritzing some hot pepper repellent spray on the leaves of your plants will make them unpalatable to grasshoppers. The downside is that you could find that tomato is a lot spicier if you fail to wash it thoroughly! Garlic sprays are a similarly natural grasshopper repellent but may be preferable if you plan on consuming part of the plant later.

This natural plant extract is found in many natural insecticides, but also has natural disinfectant properties that allow it to be used in many home products, including toothpaste. Much like chemical insecticides, neem oil works best against grasshopper nymphs and will have a reduced effect on adults. We recommend this one.

This fungus is sadly not commercially available. However, if you can get hold of a sample, it can be an incredibly dangerous foe to grasshoppers. As it thrives in hot, humid weather, this fungus will usually not be effective in more northern regions.

Once infected, a grasshopper becomes paralyzed, holding tight to plants with its front and liddle legs while the hind legs end up fully extended behind. As fungal spores multiply, they devour the grasshopper, which dies in this awkward position. Eventually, the spores become airborne and seek out new prey.

This little fungus is commercially available and is found in such bran-based products as Grasshopper Attack, Nolo Bait, and Semaspore. While it won’t kill an adult, it can lower fertility and is much more effective against many grasshopper nymphs. Applied mid-summer, this is a long-term solution and won’t get rid of the current year’s infestation.

How to Kill Grasshoppers in Your Home

When grasshoppers end up in your house, a lot of typical remedies go out the window, figuratively speaking. Thankfully, there are a few treatments which work wonders indoors.

Our old friend boric acid (we recommend the Humco brand) can work on grasshoppers just as well as any other tiny pest. Sprinkled along the edges of walls or on house plants out of your kids’ reach, this substance lacerates the legs of insects, spiders, and other bugs.

It is also highly poisonous and quickly kills once consumed. Best of all, it’s generally safe for household use (although you should still keep it clear of children and pets).

This popular pest control company also tackles grasshoppers. Simply pick up some Raid geared at these jumping pests and follow the instructions.

As with many critters, one of the first concerns upon spotting a grasshopper (especially in your home) is whether it can be dangerous. There are two key concerns with grasshoppers, as they are not reported to transmit disease to humans. This question is often the result of misinformation. Grasshoppers don’t bite people (only plants), but they will vomit the contents of their stomachs in an effort to make predators turn away in disgust. Locusts, however, have been known to bite when swarming, most commonly with certain African species.

The biggest health risk comes from the after-effects of a grasshopper visitation. As they love foliage, they can devour your herb garden and kill off your crops. Even though they’re not as destructive as their cousins, the locusts, enough grasshoppers can destroy your homegrown food supply and can thus be a major threat to anyone living off the grid.

As destructive and annoying as grasshoppers can be, they actually do carry one massive benefit. These critters are a major source of protein and one of the few insects commonly consumed in the US and can be eaten as a flour, raw, roasted, or as a confection (chocolate-covered grasshoppers being extremely popular with many outdoor enthusiasts).

The World Health Organization (WHO) has been concerned for some time about the shortage of meat and the reluctance of Westerners to add insects to their diet (a practice found in almost every country of the world to some degree and sometimes even as a dietary staple). A few grasshoppers or their kin can provide the same amount of protein as a slab of Angus beef, and you can easily farm grasshoppers in your home.

6 thoughts on “How to Get Rid of Grasshoppers”