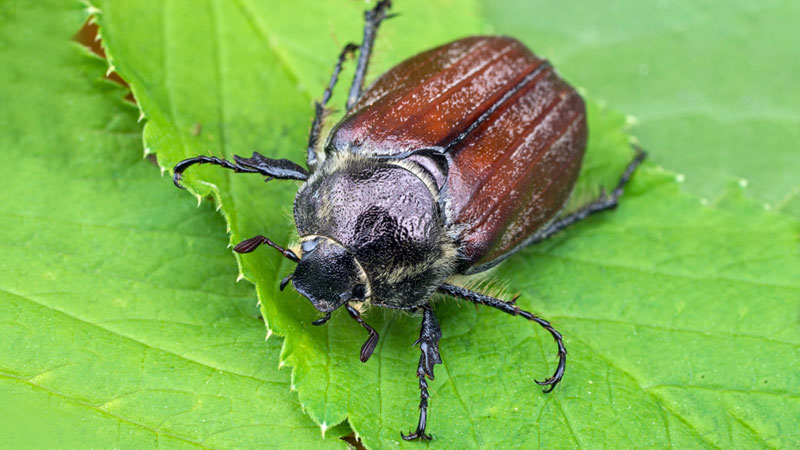 Disclosure: This post may contain affiliate links. This means that at no cost to you, we may earn a small commission for qualifying purchases.
221 shares

June is a beautiful month for garden enthusiasts, but it’s also a horrible time for pests, with a selection of bugs appearing throughout the month that can drive you absolutely bonkers. Of these, the most notorious are cicadas and June bugs, which are often confused.

Like a plague of locusts, June bugs sweep in, do massive damage, and then vanish again. Before understanding how to get rid of June bugs, you should know how to spot them and proactively reduce the risk of a visit during the spring growth season. This can be vital to protecting both your crops and your sanity.

Getting to Know June Bugs

June bugs are one of those pests that come and go fast, but wreak absolute havoc in the meantime. The terms June bug and June beetle (or May beetle) don’t refer to a single species, but are rather a nickname given to a wide range of June invaders, including:

All of these bugs share characteristics, and a particularly unlucky homeowner may encounter several species at once. The good news is that their similarities make for plenty of universal solutions to an infestation. June bugs are members of the Scarabaeidae family and are thus all species of scarab beetle. Once considered a symbol of rebirth and still treasured for their beauty, these beetles are plump, poor fliers, and range in size up to about two inches.

Their bodies vary greatly in color, from a dull caramel to striped patterns, to brilliant metallic green.

To say a June bug flies is about as accurate as saying a bumble bee is aerodynamic. June beetles have difficulty navigating and are poorly-suited for flight, thus an airborne beetle will circle lazily about and often bump into things.

When possible, they prefer being grounded by a good source of food or light to hide their clumsiness in the air.

What do June Bugs Eat?

June bug larvae will devour roots, killing your lawn and garden from below ground. Adults prefer vegetation and will usually aim for leaves and vegetation.

Japanese beetles are the most dangerous for a garden, as they will also devour crops such as maize and strawberries or even eat the petals right off of your prized rosebush.

While a threat to your garden, June bugs are perfectly harmless to humans and can be very timid. Their legs have spines, however, and the slight prickly feel when one lands on you has sometimes been mistaken for a bite.

Obviously, June beetles have an interest in the flora, but one of the biggest attractants is actually light. They’ll swarm around porch or garden lights during the night, often snacking on anything nearby.

Cicadas are sometimes lumped into the same category as June bugs but are something very different. They’re unrelated to beetles, have transparent wings, and are decent fliers. Cicadas are also far less destructive and tend to sing at night.

June bug grubs also have that typical cylindrical shape seen throughout much of the insect world and are often curled up when uncovered. Cicada nymphs look much different, with an elongated abdomen and legs. This makes them appear more like an insect than a grub when encountered.

How to Get Rid of June Bugs An active June bug infestation can be extremely difficult to get rid of. The grubs do massive amounts of unseen damage while adults will devour your roses and other cherished plants. Thankfully, there are numerous ways to kill June bugs in every stage of growth.

Normally, we warn against killing insects, but June beetles are so easy to kill without harming beneficial species that we feel safe suggesting several methods. As always, please be sure to check whether the species you’re dealing with is protected before attempting to exterminate them. Due to their slow speed and difficulty in flying, you can easily pluck a June bug right off of the plant. Be ready for a little prickly feeling if you come into contact with their legs, but they are otherwise harmless.

June Bugs on Walls and Windows

Again, the slow speed of a June beetle makes them easy prey. Their smaller size also means you can make quick work of them with a Bug-A-Salt gun. An old-fashioned fly swatter will also get the job done but minus the fun.

You can easily make a DIY June bug trap to kill these pests using a bit of molasses. Simply add 1/2 cup each of molasses and hot water to a large jug.

Close and shake well, then bury the container neck-deep near any plant the bugs have been snacking on. Be sure to remove any dead beetles from the trap rack each morning and refill the trap as needed.

Many variations of beetle traps can also be purchased. The Bag-A-Bug by Spectracide is probably the most popular.

This home remedy is easy to make and can prove deadly to June bugs. Begin by mincing four cloves of garlic and marinating it overnight in a tablespoon of mineral oil. Strain out the chunks and pour the oil into a pint of water along with a teaspoon of dish soap.

You can then use two tablespoons of this concentrate per pint of water in a spray bottle to protect damaged leaves or attack the bugs directly. There are a number of critters that prey on both adult and larval June bugs. These include frogs, snakes, and bug-eating birds such as robins, sparrows, and even hawks. Attracting any of these into your yard will eliminate a large portion of the adult beetles naturally.

On a smaller scale, nematodes (a beneficial microscopic worm) and Bacillus Thuringiensis (aka BT, a bacterium that infects bugs) can both be found at garden centers and online. Both of these tiny critters target grubs before they have a chance to devour your roots.

Thuricide, a commercial insecticide by Bionide, uses BT as the active ingredient, while St. Gabriel Organics produces a granular form of milky spore, a parasite which targets Japanese beetle grubs and can help protect your lawn for up to 20 years.

The natural attraction of June bugs to light make them easy prey for a bug zapper (we like this one), and many species are small enough you can use your Bug-A-Salt to have a bit of fun getting rid of them.

But the best fun of killing a June beetle using non-toxic methods (such as a zapper) is that they make for excellent reptile and amphibian food (as well as your carnivorous plants).

How to Keep June Bugs Away From Your House June bugs are attracted to two major things: plants and light. Ensuring there are no shrubs too close to the house can deter a large number of pests. Make sure to temporarily remove any potted plants on your porch during an infestation to deter them.

Also, turn off your outside lights at night when not needed. Setting traps with a little LED light on them is a great way to get rid of June bugs at night when you have the main lights off.

Unlike many other bugs we cover, there’s no specific June bug repellent out there. You can use any beetle repellent effectively, and most homemade general bug repellents may also work.

Thankfully, adult June beetles don’t live for very long, so it’s often more about preventing them from breeding in your yard than it is to stop them from munching on your prize roses. Remember, grubs do more harm than the adults, so prevention is the best defense.

1 thought on “How to Get Rid of June Bugs”