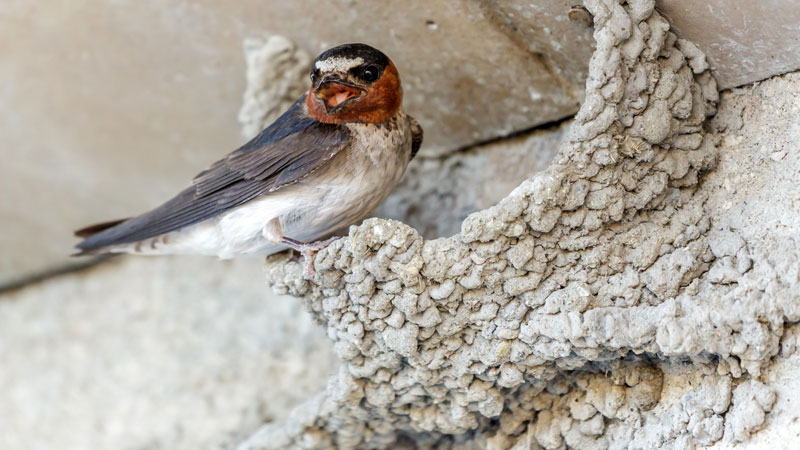 Disclosure: This post may contain affiliate links. This means that at no cost to you, we may earn a small commission for qualifying purchases.
195 shares

One of the most striking species of swallow, the barn swallow has a beautiful appearance. Unfortunately, they’re also incessant squatters, preferring human constructions to trees.

This can lead to a number of problems, despite being generally popular with those living along the birds’ migratory path. So what makes these migratory birds a problem, and how do you get rid of barn swallows legally?

Getting to Know Barn Swallows These 6-1/2 inch long birds generally have a red face and white to brown underbelly, but their upper coat is a beautiful cobalt blue. This often helps camouflage them when on the hunt, since they often prefer areas where there’s a body of water.

They tend to hunt in flocks outside of mating season, at which point a mated pair will hunt as a duet.

Barn swallows are relatively slow fliers compared to other birds, with average speeds ranging from 25 to 45 miles per hour. However, they’re quite agile and rarely land while in the open.

This makes them fun for bird watchers, but difficult for predators to catch. They usually stay close to the ground, around 23 to 26 feet up, so they can dive on prey before being noticed.

Related: How to Get Rid of Sparrows

What Do Barn Swallows Eat?

Barn swallows are insectivores, targeting ants, aphids, bees, beetles, butterflies, flies, mosquitoes, moths, grasshoppers, and a number of other common pests. Even lovebugs are for dinner but due to their acidic taste, they’re not a barn swallow’s favorite. When a larger pest is available, they’ll target that before going after smaller prey.

As with crows, ravens, and other highly intelligent birds living in domestic areas, barn swallows have adapted to life around humans and actively take advantage of us large bipedal life forms. They can be seen following pets and farmers, hunting insects that have been displaced or spooked into exposing themselves.

Whether going after a bug on the ground, water, a plant, or even a wall, the barn swallow’s aerial skill allows it to strafe the surface, scooping up the bug (or water) without slowing down or landing. Even bird baths are usually done on the go!

One peculiar habit of these swallows is their interest in grabbing small pebbles or bits of eggshell or oyster shells. The exact purpose of this behavior is unknown, but it’s believed these items are somehow used to aid in digestion. Male barn swallows build mud nests that have a semicircular shape and are attached to sheltered vertical surfaces. Under the eaves of buildings or directly below osprey nests are particularly common nesting sites.

The species is monogamous but polyamorous, meaning a mating pair will remain together for life, but sometimes breed with other barn swallows. Single males are known to attack the eggs of nesting birds, giving him a chance to mate with the female.

Nesting swallows tend to aggressively protect their territory, with males being especially hostile. It’s not unusual to see a flock of barn swallows attack hawks and other predators that get too close to their nests.

These migratory birds will leave their bird nest behind, often taking up residence in abandoned ones when they pass through the area again rather than build fresh ones.

Pros and Cons with Humans

Barn swallows can be a fine ally to humans under the right conditions, as they actively hunt a number of common garden pests. They are also eaten in some parts of the world. Unfortunately, the problems they cause can easily outweigh these two potential benefits.

By far, the most obvious and annoying problem with having a bunch of barn swallows on your property is the amount of droppings. These can get slippery, be tough to clean, and carry a wide range of potential bacterial, fungal, and parasitic risks.

Some of the more dangerous health risks you could face from contact with barn swallow poop are Cryptococcus, encephalitis, histoplasmosis, meningitis, salmonella, and toxoplasmosis. Even a bird mite infestation is possible under the right circumstances.

After mating, barn swallows are known to gather in massive flocks, especially around bodies of water containing reeds. During this time, literally thousands of birds get together to feed and prepare for migration. They also serve as layover spots during migrations where the swallows may feed from ground level in safety.

Lastly, their semicircular mud nests can cause extensive damage to the surfaces they’re attached to, and migrations will often reuse old nests if they see one.

Barn swallows are in fact protected in the US and Canada by the Migratory Bird Treaty Act of 1918, which makes it illegal to disrupt, disperse, or kill certain migratory species. Thus, you will have to consult with local wildlife authorities when dealing with an active barn swallow invasion.

That said, often the best way to get rid of many critters is to simply keep them away. The following section goes over two methods of doing just that.

Getting Rid of Barn Swallows As much benefit as a barn swallow can be to your garden or home, they can also be a problem. Thankfully, they’re far from the worst pest to get rid of.

As they’re migratory, it’s often a matter of discouraging them from coming back to your property once they move on.

As longtime visitors to RMC are no doubt aware, the first step to eliminating a critter problem is to “close the motel”. This means removing food sources and any other factors that make the critter feel at home.

In the case of barn swallows, we have the usual Big Three: food, water, and shelter.

Water sources can be a problem if your property contains water features or borders on a natural water source, such as streams or lakes. However, you can cover bird baths and make sure there are no puddles or other sources of standing water nearby.

Removing access to water is a valuable first step in getting rid of the many insects that barn swallows dine on. Keeping your yard free of debris, long grass, and other common bug control tactics will help discourage barn swallows from hanging around.

The most important thing is to ensure there are no access points to man-made structures on your property. Be sure to go over your home and fill any holes or cracks in the structure.

This will not only help prevent swallows from nesting inside your home or shed, but can reduce the chances of a bug infestation.

As barn swallows prefer to remain airborne, spikes and other common methods aren’t as effective. It’s also best to cover the space under your eaves with a downward sloping surface, as this will prevent swallows nesting in their favorite spot.

Visual Deterrents that are Easy to Swallow As with other birds, barn swallows can be easily spooked by a number of deterrents that mess with their vision. Good examples of this are Bird Barrier holographic strips or BRITENWAY reflective tape. These strips catch and reflect light, distracting birds, especially when paired with other reflective measures.

Bird netting is a good product option for protecting water features. It provides both a visual and physical deterrent but it comes with several limitations such as local code restrictions and reduced aesthetic appeal.

A third option is to use a sonic owl decoy. These work quite well against barn swallows and a number of other bird species. Unlike regular statue decoys that have to be physically moved around on an almost daily basis to remain effective, the sonic ones detect bird movement and emit owl sounds and may have flashing eyes.

You should still move a sonic owl once every five to six days to ensure the illusion remains effective.

See Also: How to Keep Starlings Away

It’s illegal to get rid of swallows while they’re nesting, so only remove nests after the mating pair migrates away. Be sure to check with your local wildlife agency to ensure your state permits the removal of abandoned barn swallow nests.

Make sure there are no signs of barn swallows in the area for at least seven days, and that the nest doesn’t contain eggs or chicks before beginning.

When in doubt, put in a removal request with local wildlife officials. They’re licensed to get rid of barn swallows as well as many other pests that an exterminator or pest control expert cannot legally handle.

2 thoughts on “How to Get Rid of Barn Swallows”