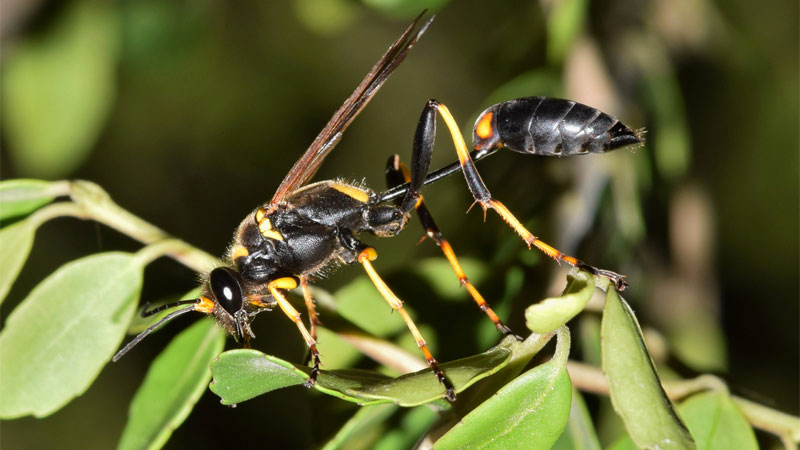 Disclosure: This post may contain affiliate links. This means that at no cost to you, we may earn a small commission for qualifying purchases.
19 shares

Have you ever gone outside and noticed a strange mud structure on the side of your home or shed? These nests can be quite attractive or rather unsightly, depending on the species that made it, but they all contain critters that look very similar to wasps.

These are mud dauber nests.

There’s a lot to know about these insects, some of which might surprise you. And if you still want to get rid of them, we’ll show you several ways to safely remove them from your home and property.

Getting to Know Mud Daubers

Mud daubers can be scary when you see one, but their looks can be misleading. In fact, mud daubers are considered beneficial insects. Let’s take a closer look (from a safe distance) at these critters, what they do, and whether we should be worried about them.

First of all, it should be noted that mud daubers actually ARE wasps from two different families.

They can be found throughout North America and tend to be diurnal, coming out in warm weather to collect mud from puddles. At around one inch long, daubers have narrow waists and tend to be either black and yellow or a metallic dark blue to black.

Did You Know?
Mud daubers get their name because they build mud daub nests. If you aren’t sure what daub is, it’s basically a sort of mortar made out of mud and is still used by humans to this day to build wattle and daub huts (wattle referring to the pattern created from the sticks over which daub is smeared). 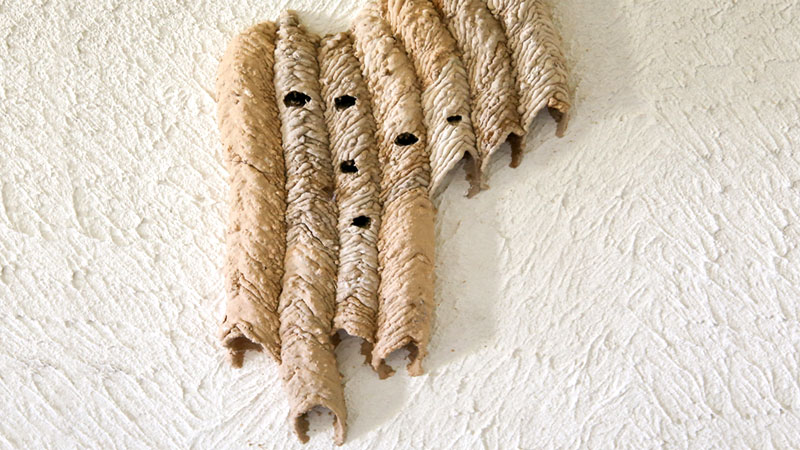 Mud daubers tend to be solitary and are usually placed into three categories based in part on their nest designs:

While it might look like these wasps are building colonies, the tubes actually contain multiple cells in which paralyzed prey is placed. The dauber lays a single egg on each of its prey and the larvae eat the host bug alive.

Because of the dauber’s solitary habits, they’re known to build their nests in parts of human structures that rarely see traffic, such as attics, barns, and sheds. It’s extremely rare for them to build a nest in major living areas or near frequently-used entrances.

It should also be noted that another group of wasps, the potter wasps, also tend to make mud nests and have many of the same habits as mud daubers. The key difference is that potter nests literally resemble clay pottery.

Mud dauber nests can be quite striking to look at, especially those of the organ pipe daubers, but they’re often a far greater pest than the daubers themselves. The nests can clog equipment and short out circuitry. Mud daubers have even been blamed for airline incidents.

Another issue is that the mud daubers only use the nests for reproduction, so defense isn’t something they think about, especially since they only live for a year. This can lead to other wasp species claiming the nests for their own.

If you see more than one wasp around a mud dauber nest, this is likely what has happened.

Mud daubers and other wasps are omnivores, and a typical mud dauber diet tends to make them quite beneficial to gardeners. Insects, and flower nectar not only give them food, but makes the mud dauber a combination of natural predator and pollinator for many plants.

On the flip side, mud daubers are a popular snack for insectivore birds, so keeping them around can also attract various species of songbird you can enjoy. 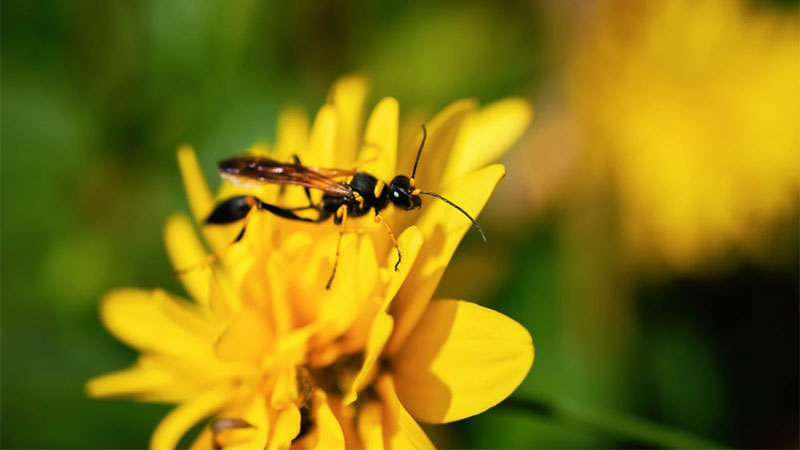 While mud daubers are considered pollinators, they don’t pay much attention to pollen. Instead, they’re more likely to pollinate nectar-bearing plants normally dependent upon butterflies and hummingbirds.

However, they can also end up carrying pollen between flowers while hunting for insects. This makes them a valuable ally for gardens in locations that are less likely to get major pollinators.

This is a common misconception among most wasp and bee species. The simple truth is that mud daubers are more interested in what they’re doing than they are in what you’re doing. As long as you leave a mud dauber alone, they’ll go about their business and forget you’re even there.

Do Mud Daubers Sting or Bite? 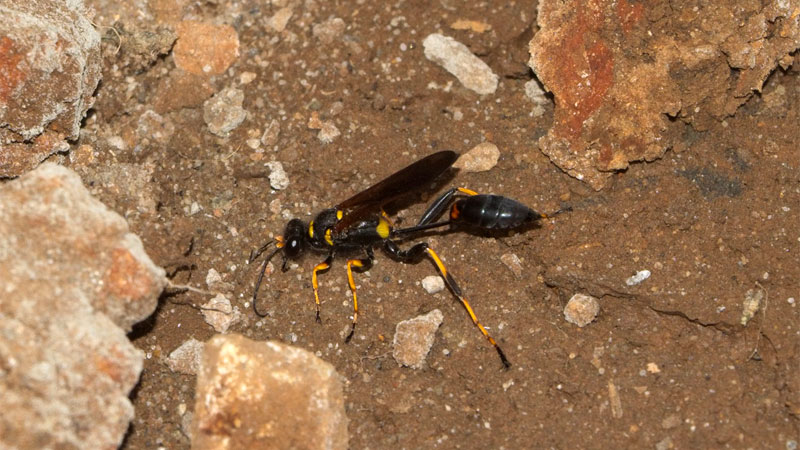 So what happens if you DO come into contact with a mud dauber? Will they attack? The answer is actually based on how threatened they are.

A mud dauber’s stinger is used primarily to paralyze spiders to be used as egg hosts, and they would rather not use their stinger outside of this purpose. In fact, if you destroy a mud dauber nest, the dauber will just go somewhere else and only strike if you try to destroy the nest while they’re inside it at the time.

Mud dauber stings are very mild compared to other stinging insects, although the venom can still trigger an allergic reaction in sensitive individuals. Still, if you have a real fear of getting stung, don’t start swatting at a nearby mud dauber.

Getting Rid of Mud Daubers 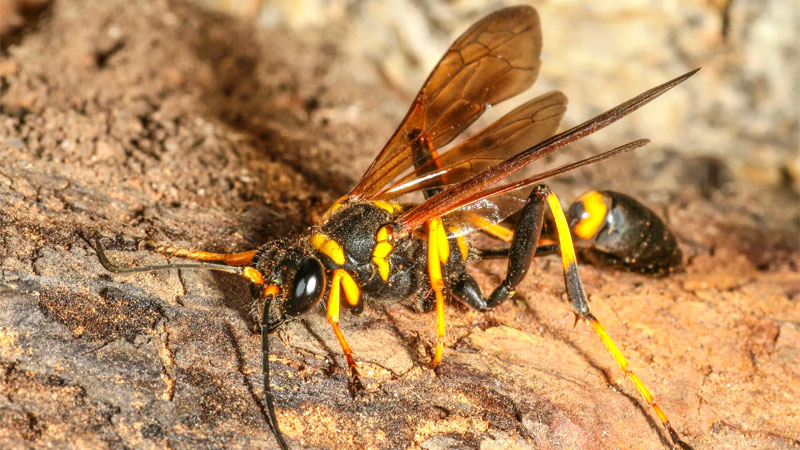 It’s surprisingly easy to get rid of a mud dauber, and not much more difficult to keep them away. Just note that these insects are almost entirely beneficial, so you might wantto let them hang around.

SHOULD You Get Rid of Mud Daubers?

Due to the fact that mud daubers are beneficial insects, it’s important to ask this question before you go after them. These little critters can do a lot of good and aren’t really pests – although their nests CAN be a problem.

Before deciding whether to kill, relocate, or coexist with a mud dauber, ask yourself the following:

Looking at the five questions, if you answered yes to question 4, you’ll want the wasp completely off your property and extermination may be the easiest option.

A yes to questions 1, 2, and 3 means removing the nest itself may be the easiest option and the mud dauber will simply relocate to another part of the property or leave the property altogether.

For questions 5 and 6, a yes means you should seriously consider allowing the mud dauber to remain where it is (unless, of course, you also answered yes to other questions).

Note that in the case of the last question, there are several species of black widow that the mud dauber will target. The iconic southern black widow (Latrodectus mactans) is common from Florida to Texas and as far north as Ohio.

Meanwhile, the northern black widow (Latrodectus variolus) is most common in the mid-Atlantic states into parts of Canada during the summer, and as far west as Wisconsin. Both species have become naturalized in Hawai’i.

Black widows aren’t always deadly (depending on the species), but they’re quite nasty and mud daubers can eliminate them before you even notice there’s a problem.

How to Remove a Mud Dauber Nest 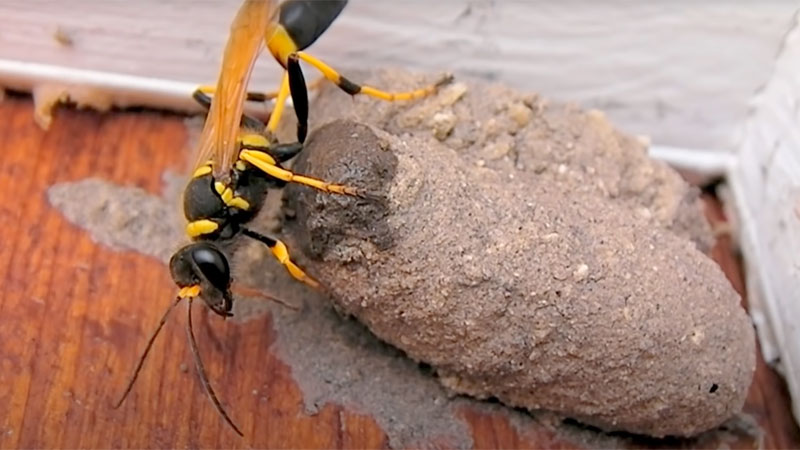 Unless you’re severely allergic, the single best way to get rid of this type of wasp is to simply remove their homes. This is an incredibly easy task unless the nest is on a fragile surface such as stucco.

To remove, simply wait until the dauber isn’t home and use a paint scraper or putty knife to separate the nest from the surface it’s attached to. Mud daubers often “close the door” when at home, but this isn’t a foolproof method of telling whether they’re home or not, and organ pipe species have far too many doors to begin with.

Be sure to wear some protective gloves just in case, and don’t worry if you see some spiders falling out – they’re completely paralyzed and you can simply put them out of their misery with your shoe.

But what about stucco and other surfaces that can be easily damaged by scraping? For these, a high pressure garden hose can be enough. Remember, these are daub nests, meaning they’ll melt if you get them wet enough (humans make daub with straw and other additives to reduce the risk of erosion). Just spray them and they’ll slowly soften to the point you can remove them without harming the surface.

In both cases, you can simply wash away any remaining mud residue, discarding the remains of the nest in the trash.

But wait! There’s one more removal option for those with a steady hand: nest relocation!

For this method, you’ll want to act at night and definitely wear some protective gear. You may also want to carefully plug the holes with cotton balls while you work.

Using a bowl of water to keep the knife wet, gently work the nest away from the wall, working your way around. Using a dropper to add water directly to the seams and giving it a moment to soften the mud will also help.

When you finally separate the nest from the surface it was attached to, you can relocate the entire nest to another spot where it won’t be in the way. Be gentle so you won’t damage the nest or agitate the dauber inside. Once the nest is in its new home, slowly remove the cotton doorstops so the dauber can get in and out again.

Again, this tends to be an extreme and unnecessary response, but may be the best option for households that have a severe bee and wasp allergy. You can use several basic methods, all of which are quick and effective since you only have one wasp to deal with: