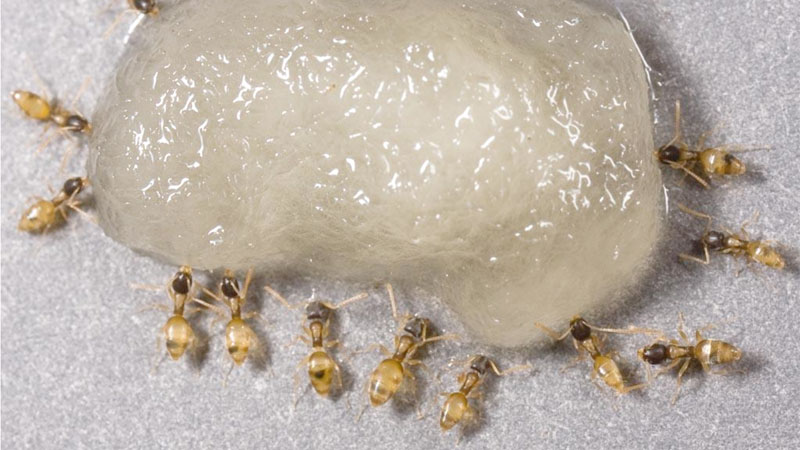 Disclosure: This post may contain affiliate links. This means that at no cost to you, we may earn a small commission for qualifying purchases.
149 shares

Ants are one of the most common infestations in modern homes, and can appear for a number of reasons. The vast majority are black, red, or occasionally albino ants. However, some species may catch you off-guard with their unique appearance.

One of these unusual species is the ghost ant. These little gals are quick and their coloration allows them to seemingly vanish when they flee.

Understanding these ants can be crucial to controlling them, as their societies are slightly different than the common black ant. Here’s how to find them, get rid of them, and keep them away.

Getting to Know Ghost Ants

Ghost ants are sometimes called black-headed ants and are most commonly found in kitchens, bathrooms, and gardens. They’re highly adaptable and can spread quickly.

As they’re a tropical species, they’re generally found in only the southernmost states such as Texas and Florida but have spread as far as Canada and Hawaii thanks to greenhouses and plant nurseries. Chances are, the first thing you’ll notice is the black head and thorax. Pretty much the rest of a ghost ant’s body is pale to the point of being almost translucent.

The abdomen has faint lighter markings that can be hard to see without getting close, as the workers of this species measure only about 1/16 inches long.

As with all ant species, ghost ants live in colonies, with the average colony size being moderate to large in population. However, this species will send one or more fertile females and an escort of workers, occasionally carrying larvae and pupae, to a prospective new nesting ground.

This expansion method is often referred to as budding, and it allows for very rapid growth of the new colony.

Ghost ants are highly adaptable and a colony will contain multiple queens and possibly several satellites with their own queens. You can find colonies nesting in dead branches, under rocks, beneath flower pots or dense tufts of grass, as well as behind baseboards or cabinets.

See Also: How to Get Rid of Carpenter Ants

What Are Ghost Ants Attracted To?

A ghost ant’s diet is primarily honeydew, so they will often set up colonies near plants infested with aphids, mealybugs, or other honeydew-producing species.

They’re known insectivores, so they may consider other infestations to be an all-you-can-eat buffet. As with most ants, they’ll go after crumbs and other sugary goodies you leave within their reach.

They also prefer places with plenty of moisture, so you will be more likely to find them setting up home in kitchens, bathrooms, or greenhouses than your living room.

All ants lack a stinger, but they are known to bite. Some more than others (ie: fire ants). Thankfully, ghost ants only bite when seriously threatened and their jaws are too small to cause damage.

People often get confused when they hear someone referring to sugar ants. Most species of ant that are attracted to sugars are given the nickname “sugar ant”. However, true sugar ants are a species native to Australia and are brown to black in coloration.

See Also: What Are Those Tiny Black Bugs in the Kitchen?

Getting Rid of Ghost Ants Like Argentine ants, you may need to use a little extra care when dealing with ghost ant colonies, due to the potential for satellite colonies. It’s easy to get one and miss two or three more. However, you can deal with them using methods similar to most other ant species. The best way to deal with ants in your home is the use of traps. A good bait trap containing borax (such as Terro Liquid Ant Baits) laid along their scent trails will attract the ants and fool them into carrying poison back to the nest where they’ll share it with other ants, larvae, and the queens.

Sticky traps are also useful, although they’re harder to tuck away where pets and children can’t reach them. These methods are also useful if you find ghost ants in your car. There are plenty of natural methods you can use in the garden that will also work against other insects. A spray made from two parts white vinegar and one part water is generally safe for use on many plant species.

Neem oil is also an excellent choice. Alternatively, you can introduce or attract insectivores such as spiders and lizards.

Related: How to Get Rid of Ant Hills

How to Kill Ghost Ants

While they look different and have a slightly different colony structure, ghost ants can be killed with the same methods as any other ant. This includes insecticides, traps, and attracting predator species.

The best way to get rid of a ghost ant issue is to not have one in the first place, and there are a few good ways to ensure this.

Chances are, your home is full of entry points. These are tiny cracks and holes that an insect or other pest can get through. Periodically check the walls, windows, and doors for signs of damage or missing caulk and seal those spots.

Related: Entry Points 101 (Keep Pests Out of Your Home)

Be sure to clean any debris in your yard and avoid leaving food messes, especially in the kitchen. This not only discourages ants from making a nest but also reduces potential food supplies. Fixing leaky faucets will also help eliminate water sources.

Whether you have black ants, ghost ants, or tiny white ants, if they like honeydew, any plant infestation will be a major attraction. Use a neem oil soak or other forms of systemic and foliar insecticides to eliminate these infestations and as a preventative measure.