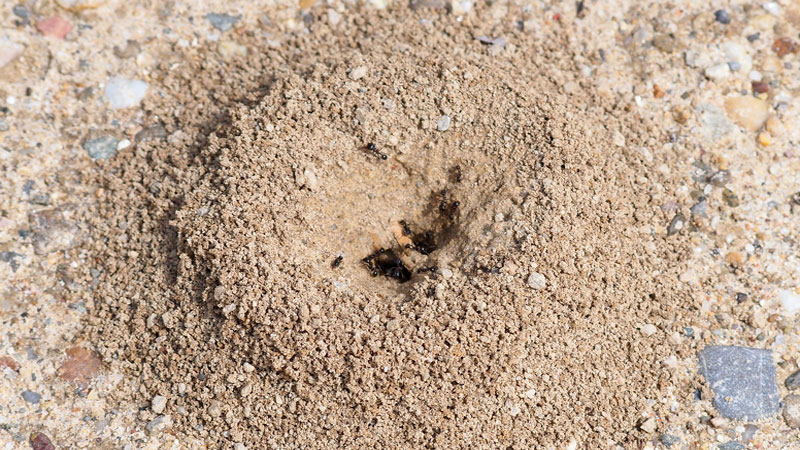 Disclosure: This post may contain affiliate links. This means that at no cost to you, we may earn a small commission for qualifying purchases.
105 shares

It’s Sod’s Law that no matter how well-kept your lawn and walkway are, something will invariably ruin the view.

One of the most common of these foils is the ant mound. They seem to pop up along cracks in your driveway or sidewalk, in the garden, or poking through your carefully manicured lawn.

While you may not have an interest in dealing with these little visual nuisances, you might have discovered that the ants living in them are more of a problem. Destroying the mounds can help eliminate an infestation of invasive species such as fire ants, or help you deal with other garden pests the ants may be protecting, such as mealybugs.

Here’s everything you need to know about ant hills, as well as several ways to get rid of them, both naturally and chemically. 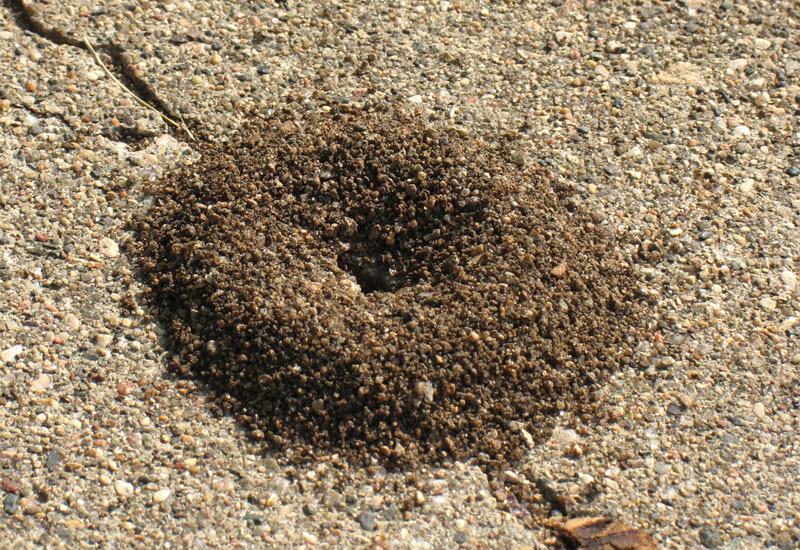 It sounds unnecessary, but the key to getting rid of ant hills permanently is to have a good understanding of what they actually are and why they exist. Ant hills aren’t just there for decoration, and will just be rebuilt if you don’t address them properly.

What Is an Ant Hill?

Sometimes referred to as ant mounds, an ant hill is an above-ground structure resembling a small hill or mound made of dirt. These may resemble tiny piles of dust or massive outdoor stalagmites. While generally harmless, they can be an eyesore. Having them close to your home may also mean the risk of an invasion.

Why Do Ants Make Ant Hills?

Most ant species live underground in vast complexes of tunnels and rooms. All of that excavated dirt has to go somewhere. As the workers excavate new passageways and chambers, they carry the dirt out and deposit it at the entrance, much like human miners do. Ant hills are the result.

But these prehistoric survivors have learned some very valuable lessons over the past hundred million years or so and have adapted these mounds to serve as more than a city dump.

The mounds are built around the colony entrances and tamped down to help prevent rain from flooding the lower galleries. To some extent, they also serve as temperature regulators, much like a vestibule or sally port in human structures.

How Big Can an Ant Hill Get? 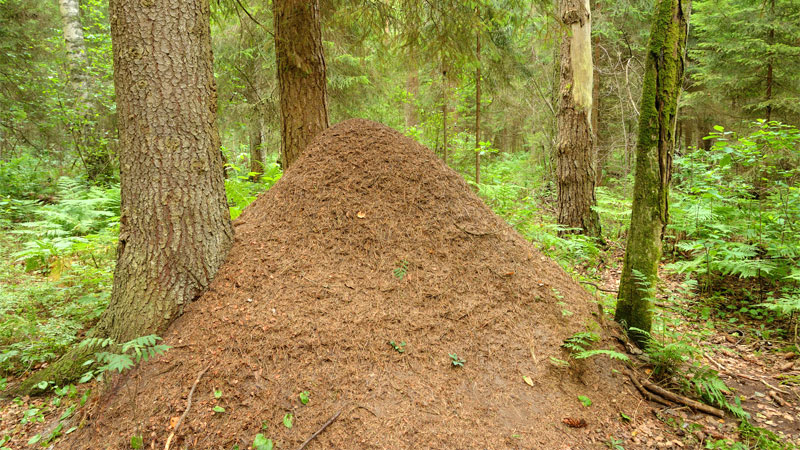 Chances are, you won’t find a mound along the sidewalk cracks that measures more than an inch in height. However, species living in forests or other relatively human-free locations are capable of building small skyscrapers.

But more important than the hill itself is the fact that this is just one entrance to a massive underground complex, and thus an ant hill may be considered similar to an iceberg, with only a small portion being visible.

The term “ant hill” is sometimes used synonymously with an entire ant colony, and this usage means they can get pretty big. Extending anywhere from two inches to 13 feet deep, colonies sprawl out horizontally just like a human city.

The current Guinness record holder is a supercolony of Argentine ants discovered in southern Europe in 2000. It extends more than 3,700 miles across and has literally billions of residents.

Meanwhile, the second place record holder is a Hokkaido ant supercolony reaching 670 acres across and containing an estimated 45,000 nests.

Thankfully, even the most ambitious ant colonies in your backyard will likely only extend outwards a few hundred feet and will likely be far smaller.

Why Do I Have So Many Anthills in My Yard? 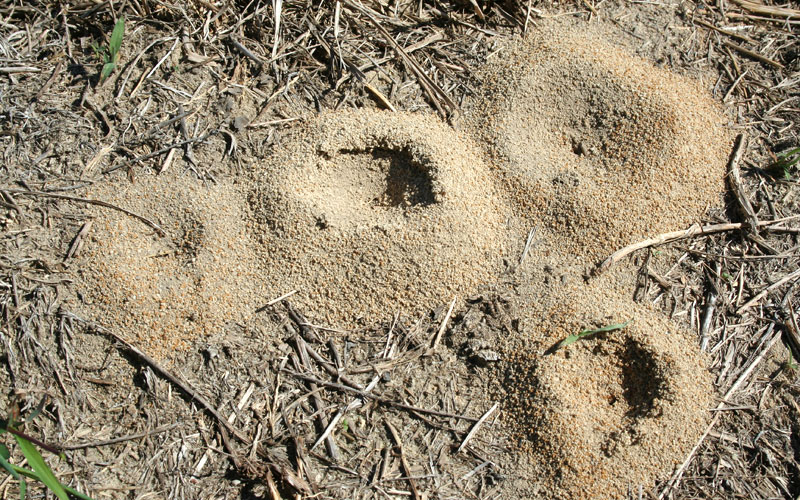 As mentioned, an ant hill is merely an entrance to a much larger underground complex. Just like in human buildings, the larger the complex, the more entrances it’ll have. Sometimes the hills are built for exploration or escape. Other times, they’re intentionally located close to a food source.

Finding a large number of ant hills may thus mean either multiple individual colonies (most often a mix of big and small black ant species) or one massive colony.

What Is Inside an Ant Hill?

On the most basic level, ant hills are simply a pile of dirt (or sawdust, for carpenter ants). But many ant species have developed far more complicated building techniques.

Ant mounds may contain gravel or small pebbles, leaves, pine needles, sand, and even tree resin. Some exotic species even mix sand and tiny sticks with mud to make a form of adobe for their entrances. Survivalists will sometimes break these mounds (which can get pretty huge) for use in their own building materials.

Larger ant hills may also contain chambers for the workers to bring larvae up on warmer days, and may contain a single tunnel to the entrance or a small network of tunnels. They may even contain storerooms so workers have access to food, which they’ll then move between galleries as needed.

Can You Just Step on an Ant Hill to Destroy It?

This is one of the most common mistakes people make. An ant mound is just an entrance. If someone destroys your front door or barricades it, you can simply exit through your back door until the front door has been repaired or replaced.

The same is true for ant hills. Flattening it or even tamping the ground will just prompt the ants to repair the damage.

Methods for Getting Rid of Ant Hills

There’s little point in trying to remove ant hills unless you also deal with the colony beneath it. The following methods are all known to work, although the exact success rate of each can vary based on the species you’re dealing with. 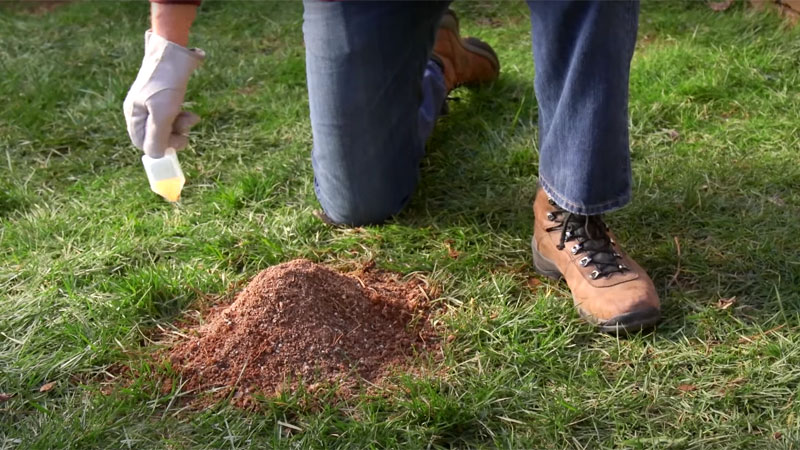 Pesticides can be dangerous to your family or the environment, but they’re not without merit against ants. Remember, to permanently get rid of the mounds, you must first kill the colony’ queen. Here are some of the better options available.

Taurus SC – This is one of the best non-repellent insecticides out there that treats most varieties of ants and termites. Ants tough, ingest, and spread the insecticide throughout the entire colony. This is the generic version for the popular and more expensive Termidor SC.

Maxforce Complete –  This granular bait contains a unique mixture of proteins, simple sugars, and fats that make it irresistible to ants. They take it back to their colony (including the queen) where the poison does its thing.

Amdro Ant Block – Another granular type bait that is used as a perimeter defense that can kill 25 common species, including carpenter ants, fire ants, ghost ants, and pavement ants.

Bifen L/P – Another granule pesticide that uses bifenthrin as the active ingredient. It can kill ants, spiders, springtails, wingless and winged termites, and many other common pests.

Reclaim IT – One of the most popular insecticides containing bifenthrin, it can decimate ant mounds when used as a soil soak. Simply add a mix of one tsp Reclaim IT per gallon of water to a spray bottle or sprayer and soak the ground in a four-foot diameter around the mound.

Terro – Available in granules or as bait traps, Terro is a trusted brand that works well against several pests, including ants, spiders, and cockroaches. You can use a shaker bag over an ant mound and pour a gallon of water over it to destroy large portions of a colony at once. 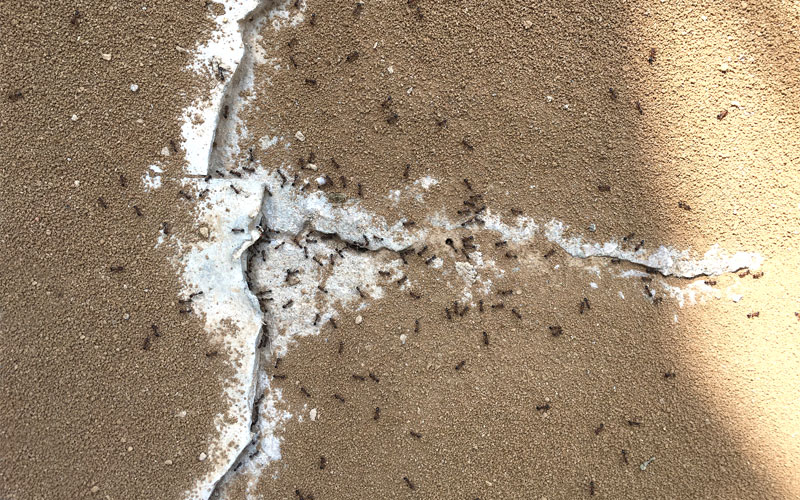 Home remedies may take a bit longer to work, but using natural solutions won’t produce superbugs and are far less toxic to the environment.

Baking Soda – When mixed into a bait, baking soda can lead to a slow death. This common kitchen chemical creates gas in the digestive tract which the ant can’t expel, causing it to boat and starve to death.

Borax – Borax is a natural mineral containing boron that can be used for all sorts of indoor and outdoor ant baits, although ants will avoid it if you use too much in a dry or wet bait mixture. It has a similar effect as baking soda.

Boric Acid – A relative of borax, boric acid is a contact killer. You can use it in a solution or on its own in either liquid or powder form. The powder can be sprinkled directly on and around an ant hill to kill any ants using that entrance.

Carbonated Water – Simply pour some tonic water over the mound and let it soak in. Not only will some ants drown, the carbon displaces oxygen in the galleries, causing ants to suffocate.

Diatomaceous Earth – Simply sprinkle DE on and around the mounds. While it won’t kill the queen, it can decimate a colony’s population over time. You’ll need to reapply every few days and after it rains, however.

Homemade Bait Stations – Mixing borax, baking soda, or other ant killers with sugar or peanut butter and placing it along ant trails is a great way to kill off an entire colony, as the workers will carry the bait home where it’ll eventually be given to the queen.

Soap – Borax isn’t the only household cleaner that kills. Mix some Dawn or insecticidal soap with water and pour it liberally over the colony. The soap makes it difficult for the ants to escape and they’ll drown.

Avoid using harsh cleaners such as bleach, as these can contaminate the soil. Likewise, you should skip using vinegar, as it acts as a repellent and will just make the ants migrate for a few days before coming back.

Water – Boiling water, which kills ants instantly on contact, is a quick, free method. However, you should only use this in driveway cracks or on sidewalks, as the heat will kill grass and plants.

Also, it’s unlikely you will kill the entire colony since the water will start cooling off as soon as it makes contact with soil.

While we don’t suggest you use this method personally, it can be worth the hefty price to hire a professional to do it for you. Working with molten metal is quite dangerous, and aluminum has a melting temperature of 1,220.54 degrees Fahrenheit. The professional will clear all vegetation around the mound site before pouring.

What makes this method worth listing isn’t its effectiveness (which is without doubt), but what happens next. Once it’s had time to completely cool, grab a shovel and carefully excavate the area around the mound.

The metal will have filled the tunnels and galleries, resulting in an amazing piece of art you can proudly display.