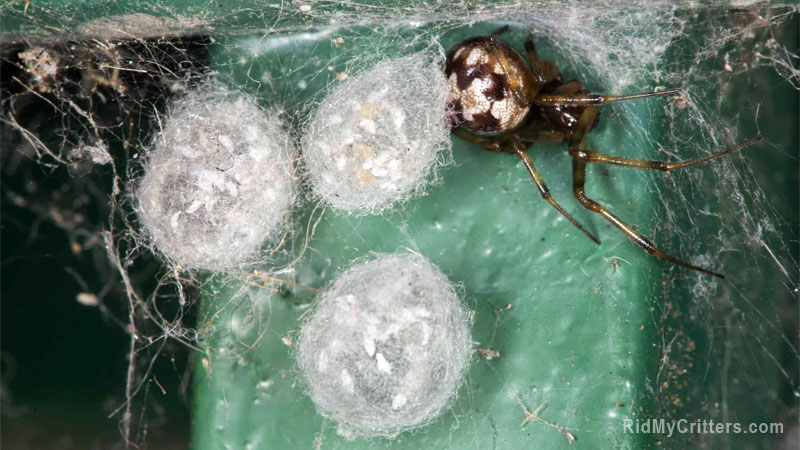 Disclosure: This post may contain affiliate links. This means that at no cost to you, we may earn a small commission for qualifying purchases.
8 shares

You might already know how to get rid of spiders in the house, but what about the eggs they leave behind? Come spring, you could be dealing with a nest of spiders numbering in the hundreds.

Thankfully, most of these baby spiders will die or move on, but plenty will stick around. Disposing of a spider nest when you see it will help reduce the risk of a sudden infestation. Keep reading to learn how to get rid of spider eggs the best way possible.

Spider sacs or clutches are fairly easy to spot once you know what to look for. Unlike individual eggs which are usually too small to see, an egg sac is small but visible.

They can vary from a disk-like shape to fully round, although teardrop shapes are common. Coloration also varies by species, with light to dark shades of brown, grey, or a creamy white.

The clutch is actually a thick netting of spider silk designed to insulate and protect the eggs while they incubate.

Where do Spiders Lay Their Clutches? 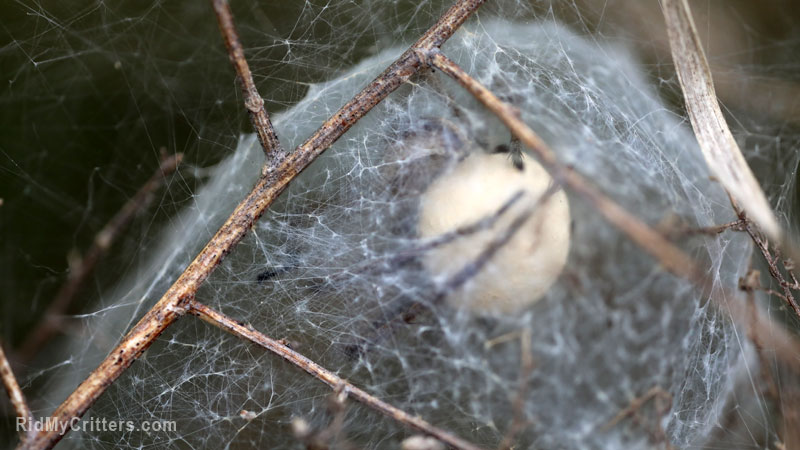 This depends largely upon the type of spider. In the yard, they’re often located under fallen leaves and branches, in wood piles, tucked into burrows, or under the eaves.

Some spiders will also lay their eggs on tree branches away from ground predators. Hunting spiders will often lay the clutch near a potential food source. Some, like the wolf spider, actually carry their egg sacs wherever they go.

Indoors, you’ll most likely find the eggs in a relatively unused place, such as your attic or basement. Some spiders will lay their clutch under furniture, especially if you don’t regularly clean under the couch.

In most cases, you’ll find the sac tied into a corner where it has the most protection. Thus the underside of a cabinet where there’s edging is a good place to spot them.

Cars follow a similar rule to homes. The sacs will likely be in the engine compartment or trunk where it’s more insulated and away from human eyes. An RV or camper will have more places for the spider to hide her young, but even a motorcycle that hasn’t been used in a while can become an unwitting babysitter.

Depending upon the species you’re dealing with, spider eggs will be clutched either in spider webs, suspended from a surface, or webbed directly into a corner.

They’re more likely to produce a clutch in an area where an edible insect (flies, mosquitoes, grasshoppers, etc.)  population exists but less likely to be where predatory insects such as wasps or centipedes are found.

Just How Many Eggs Does a Spider Lay?

Spiderlings are very fragile and most don’t make it far from the sac upon hatching. As a result, a female spider has the ability to produce several hundred eggs at once.

A black widow will typically lay 300 eggs. Meanwhile, the brown widow lays 120 to 150 eggs per sac and is capable of leaving up to 20 sacs during its short lifetime. A hobo spider on the other hand produces up to four egg cases with each case holding 50-100 eggs.

What Happens When the Eggs Hatch? 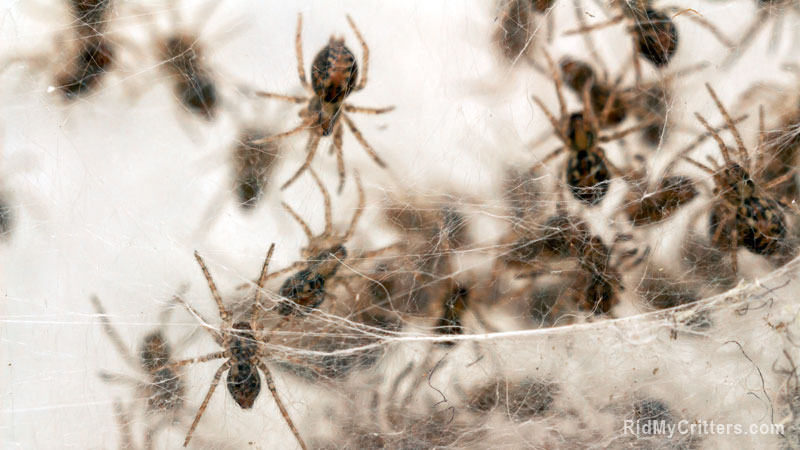 Spider egg sacs are designed to protect throughout the incubation period, which may last only a few weeks or an entire winter, depending upon the species.Upon hatching, the clutch of spiderlings break through the sac. At this point, they’re tiny and pale to almost translucent. They also move with incredible speed.

Related:  Where Do Spiders Go in the Winter?

In most cases, the spiderlings will disperse by ballooning. They migrate to a high point and create a little silk parachute, then jump into the wind. If you remember the ending to Charlotte’s Web, this was what Charlotte’s children were doing at the end.

It takes about a year and several moltings for the spiderlings to fully mature, during which time most will be killed or eaten. However, any spiders still in your home when they mature will mate and further increase the infestation.

How to Get Rid of Spider Eggs

The knee-jerk reaction when spotting a clutch is to squish it. This can be a mistake, as some species develop faster than others and you could easily end up with a hundred or more tiny spiders raining down on you.

Instead of stepping on an egg, try these methods instead for some safe ways to get rid of spider sacs.

First things first. You should prepare yourself in case the sac belongs to a venomous species. Wear long sleeves and pants as well as work gloves so any spiderlings that hatch during removal can’t bite you.

Always use tools that have an extension so you aren’t in harm’s way if the sac breaks. Also, be sure to avoid squishing or breaking open the sac, as this can release the contents all over the room.

You may be wondering, will bleach kill spider eggs? An all-around useful cleaning product, bleach is safer than the average pesticide and will quickly destroy spider eggs.

Simply dilute some bleach with water in a spray bottle and squirt each spider egg sac you find. Be warned that bleach will generally ruin any item that has color, such as fabric or wallpaper, so use this method responsibly.

Some pests, such as centipedes, actually prey on spiders. These spider killers will actively seek out spider nests and destroy them. They also help against insects. Of course, there are cuter critters such as lizards that can do the same job and make good pets.

Various pest control products are designed to kill spider eggs. Try to pick an oil-based product that breaks down the webbing and soft-bodied spiderlings quickly. Some products will remain effective for up to a couple months, preventing additional attempts to lay eggs in that spot.

One of the best spider killer sprays is Miss Muffet’s Revenge. Not only does it have a great name, it kills spiders and their eggs quickly and repels them for up to 12 months. A good odorless spider egg killer option is Harris Spider Killer.

As always, be very careful when using any type of poison, be it a spray or traps, as they may harm beneficial species or come into contact with people and pets.

Your vacuum cleaner is often your best friend in pest control, especially if you have a steamer. You can use the vacuum to suck up spider eggs (even if they break open, the spiderlings will be contained), then dispose of the bag in the trash immediately after.

You may also freeze the bag first to ensure any hatchlings are killed if you believe the sac belongs to a deadly species such as the brown recluse. In the event you have a canister vac, be sure to empty it carefully or submerge the canister in a bucket of soapy water to kill any spiders that hatch before dumping.

8 thoughts on “How to Get Rid of Spider Eggs (Before They Hatch!)”