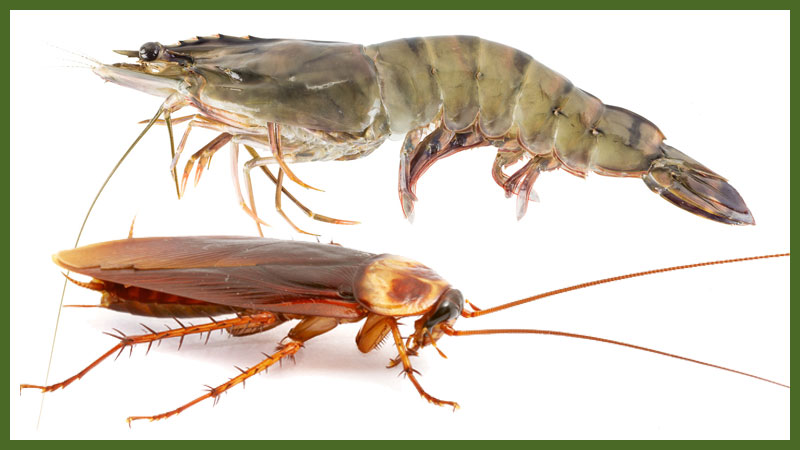 Science has a very complicated way of classifying things. They will often group things together based upon physical similarities, only to later separate them based on minor differences.

Even more confusing is the fact that there are multiple classification systems which can place a plant or animal on completely different locations on the evolutionary tree than other systems.

Today we’re going to go a little off the beaten path and explore a surprisingly common question in the pest world that arose in part because of how things are classified. So be sure to finish any food you’re eating before going further, because we’re about to ask the surprising question…

Are shrimp and cockroaches actually related? 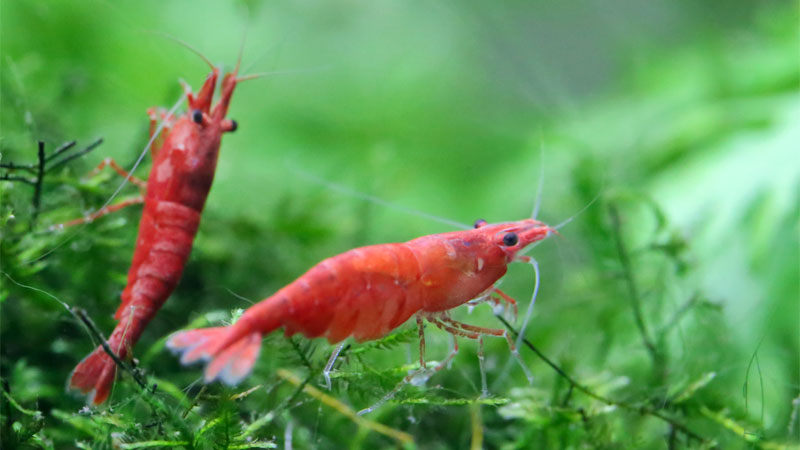 There are a LOT of different species of shrimp out there, many of which look nothing like the shrimp in your cocktail.

To keep things simple, we’re only going to talk about the “true shrimp” (Infraorder Caridea), which are the ones you’re likely to find at a supermarket or on a menu. However, much of the information here will also apply to other critters commonly referred to as shrimp.

If you’ve never seen a shrimp before, this is one of the places where you might think they’re an insect if one was described to you.

The abdomen is a many-segmented part that resembles a tail and can be best compared to that of another close relative, the lobster. Shrimp have a pair of antennae, much like insects. But this is where the real comparisons end.

It’s a common myth that shrimp have six legs. However, they’re decapods, meaning “ten feet” and sometimes the front legs are modified into large or long-armed claws much like lobsters or crabs while other times they’re smaller than the legs and only long enough to get food into their mouths.

In terms of size, shrimp can vary from being a fraction of an inch to as long as 13 inches long – a record held by female tiger shrimp (Penaeus monodon).

Shrimp are cosmopolitan, meaning they can be found everywhere in the world except Antarctica, and their appearance and coloration tend to vary based upon the threats and food availability of their individual habitats.

There are more than 2,000 species of shrimp out there. Classification for these critters can be very complicated, as there are all sorts of random crustaceans known as shrimp throughout the animal kingdom.

However, all shrimp fit within the following portion of the classification tree:

The true shrimp and prawns. True shrimp have the further classification of:

It should be noted that prawns (suborder Dendrobranchiata) are closely related to true shrimp and the two names are often used interchangeably.

While they’re certainly included in this little comparison to the extent that they’re often called shrimp, we don’t want to muddy the waters by introducing critters based solely on nicknames.

Shrimp are technically omnivores, but their diet from one species to another can vary greatly. For example, many shrimp are filter feeders, meaning their legs have special bristles known as setae which catch food particles from the water as the shrimp moves.

Other shrimp are cleaners. These shrimp will do a dance to entice fish over, then pick away dead scales or necrotic tissue, cleaning the fish and getting a meal in exchange.

Aquarium owners often employ ghost shrimp (Palaemonetes spp.), which are some of the many shrimp that pick out debris from the seabed or scrape algae from rocks.

Finally, there are some predator species, such as the pistol shrimp (family Alpheidae), which have asymmetrical claws they can use to make a loud snapping sound. This underwater “gunshot” stuns nearby prey, allowing the shrimp to strike.

Shrimp are aquatic critters that can be found in both fresh and salt water bodies worldwide. They’re often found in reefs and other environments where they can easily hide.

Did You Know?
Shrimp are excellent swimmers and can move around using small appendages on their undersides. However, when they want to move more quickly, they flex their tails, shooting them away in full reverse! 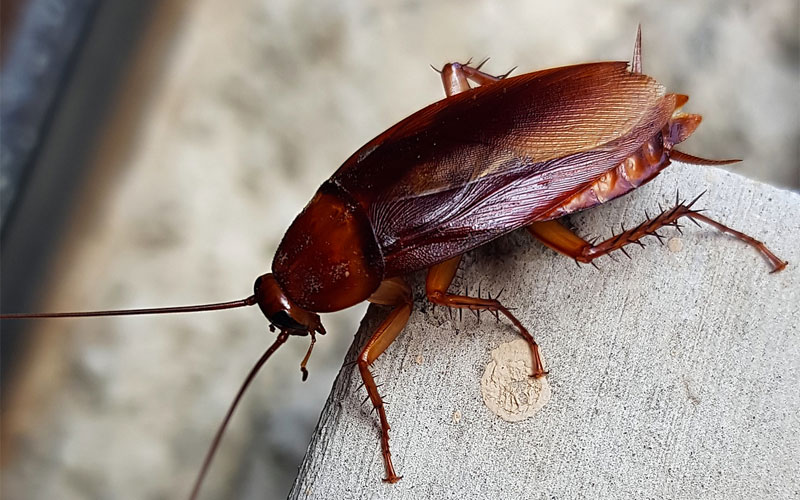 Cockroaches are some of the most feared and hated insects in the world. While only a few species actually infest homes, they make up a large percentage of pest control product sales every year.

Cockroaches tend to have a similarly oval body shape, with some being more elongate than others. As with all insects, they have a head, thorax, and abdomen, a pair of antennae, and six legs. They can range in size from a fraction of an inch to nearly four inches long.

Coloration is usually shades of brown to black, with some reddish hues, and some species also have markings. For example, the domino cockroach (Therea petiveriana) is black with six white dots along its back.

There are approximately 4,600 species of cockroach, although only 30 are known to be home invaders. They all belong to a single order:

Of the many species of roaches, those in the US will likely only have major problems from a handful, such as: the American cockroach (Periplaneta americana), Florida woods cockroach (Eurycotis floridana), German cockroach (Blattella germanica), and Oriental cockroach (Blatta orientalis).

However, there is another…

Did You Know?
The order Blattodea contains not only cockroaches, but also termites (infraorder Isoptera). While originally considered its own order, recent genetic testing has proved that termites and cockroaches share a common ancestor and the two orders were merged.

Cockroaches are often omnivorous and are known as one of Nature’s great waste disposal units. For example, the American cockroach is well-adapted to eating just about anything organic, from skin flakes and old glue to paper, textiles, dead insects, and fruit.

However, many other cockroaches are adapted primarily for digesting crystallized cellulose in wood. In all but a few cases, this ability to live off of wood is actually due to the symbiotic bacteria genus Blattabacterium that infest the guts of all but one recently discovered genus of cockroach.

Cockroaches are cosmopolitan (meaning they can be found all over the world except for Antarctica). Most species are nocturnal and tend to flee from light.

Depending on their primary food source, they’ll often be found living in fallen or decaying logs, hiding under rocks, or even invading homes (sometimes even inside your dishwasher or refrigerator).

They prefer warm, dark, and damp environments with easy access from food and minimal animal activity.

So now that we’ve had a look at these two groups of critters in detail, let’s begin comparing notes. We’re looking not only at whether the two species are related in terms of classification, but also in terms of appearance, behavior, and other factors. 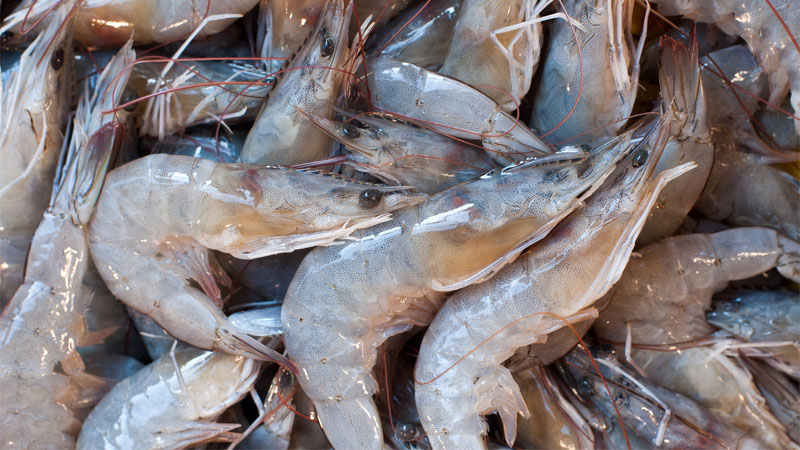 Both shrimp and cockroaches are arthropods. This means they have exoskeletons and multiple pairs of legs. They both have antennae and their bodies technically contain a head, thorax, and abdomen.

Additionally, both of these critters have species that are more specialized for specific food sources, such as wood or dead scales.

The two species can be incredibly agile when threatened, with cockroaches skittering for the nearest dark crevasse and shrimp using their tails to jet backwards with surprising grace.

#4 – Can Cause Allergic Reactions

Both shrimp and cockroaches can cause severe allergic reactions. Those with a sensitization to cockroach poop are often reacting to contaminants carried by the cockroaches themselves and often react after contact with contaminated food or surfaces. In rare cases, roaches even bite.

Meanwhile, those with a sensitization to shrimp and other crustaceans most often react by directly consuming them. A shrimp allergy is no joke and can easily end with you spending your vacation as a patient in the emergency room. Luckily, allergic reactions to cockroaches tend to be a bit more mild.

While it’s true that many species of both cockroaches and shrimp are edible, very few cultures consume cockroaches while shrimp are popular in most cultures. However, both are technically good sources of protein and very low in carbs – if you’re ever desperate enough to eat a roach, at least you won’t starve.

Curiously enough, both shrimp and cockroaches an be kept as pets. The Madagascar hissing cockroach (Gromphadorhina portentosa) is often kept as an exotic pet. They don’t like light and can climb glass, so they’re usually kept in aquariums with a screen lid and petroleum jelly smeared around the upper inch or two of the walls to prevent escape.

Likewise, shrimp are popular among fish enthusiasts, with several species being kept in home aquariums. The most common of these is perhaps the aforementioned ghost shrimp, which serves as an aquarium cleaner and can coexist with a wide range of fish and other aquatic critters.

#7 – Often Confused With Other Species 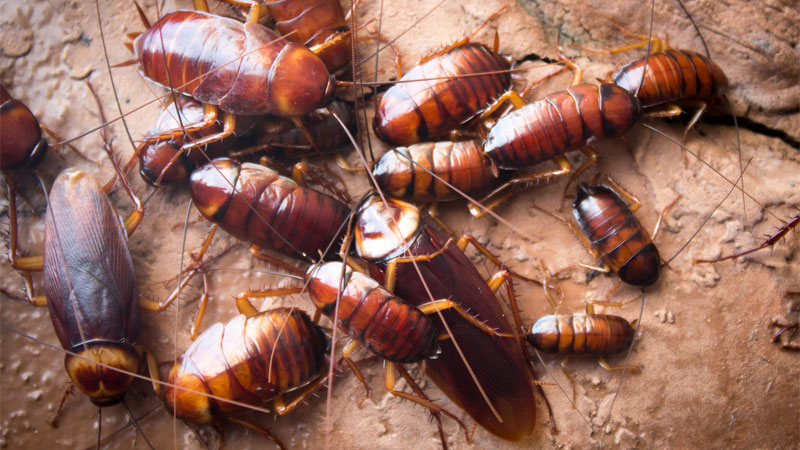 While people often claim that shrimp have six legs, they’re actually decapods with 10 legs (with the forelegs modified into grasping claws) while cockroaches are hexapods with only six legs. Likewise, while shrimp technically have  head and thorax, the two are fused into a cephalothorax.

Shrimp are aquatic creatures that prefer life in bodies of salt or freshwater. Cockroaches are purely terrestrial, although some species can swim. Trying to put the two into the same environment will result in one or the other perishing, depending on what that environment is.

Another huge difference is that shrimp aren’t pests. They won’t climb up through your open moonpool to scavenge your deep-sea pantry for rations from the surface world.

Unfortunately, roaches won’t be as respectful of terrestrial homes as shrimp are of sea bases. Once they get into your home, they’ll contaminate any food they come in contact with and can be a pain to get rid of.

And speaking of getting rid of critters, cockroaches hate light (the exception being the Asian cockroach (Blattella asahinai), which is nocturnal but attracted to lights and shiny surfaces. They’re also quite afraid of humans and will do everything in their power to get away.

Meanwhile, shrimp are much less bothered by light sources and can be raised in aquariums. They’re generally not threatened by divers and will go about their business unless they feel threatened.

Finally, social structure is an absolutely massive difference between shrimp and cockroaches. Shrimp tend to be somewhat solitary, although you may find several hanging out in a relatively small space. They do, however, brood their eggs instead of releasing them directly into the water as many other aquatic critters do.

This is in stark contrast to cockroaches, which often have a very complex social structure. Some specie are known to nurture their young and retain parental roles within the colony. They communicate with each other using a variety of pheromones and seeing one pretty much guarantees there are more nearby.