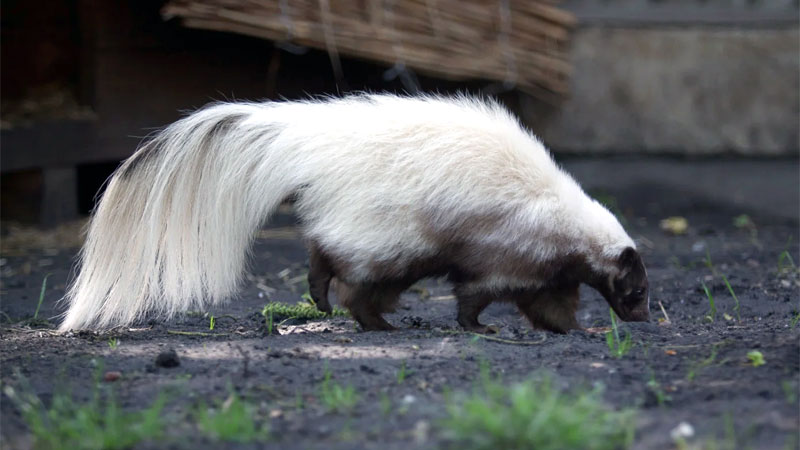 Skunks have a very long love/hate relationship with humans. Considered a symbol of love in some cultures and a dreaded pest in  others, it’s no wonder modern American culture tends to hate the skunk but also once had a cartoon skunk character named Pepé Le Pew who loved to flirt but was afraid of aggressive females.

But no matter whether you think they’re evil creatures or the most loving of pets, these members of the weasel family are a lot more complex than you might first think.

In all, there are 10 species of skunk across three genera, as well as members of another genera that are considered by some to be skunks but not others. While often portrayed as black with white stripes, they can also be cream, tan, brown, yellow, and even lavender; with striped, spotted, and/or albino fur.

Related: How to Get Rid of Skunks 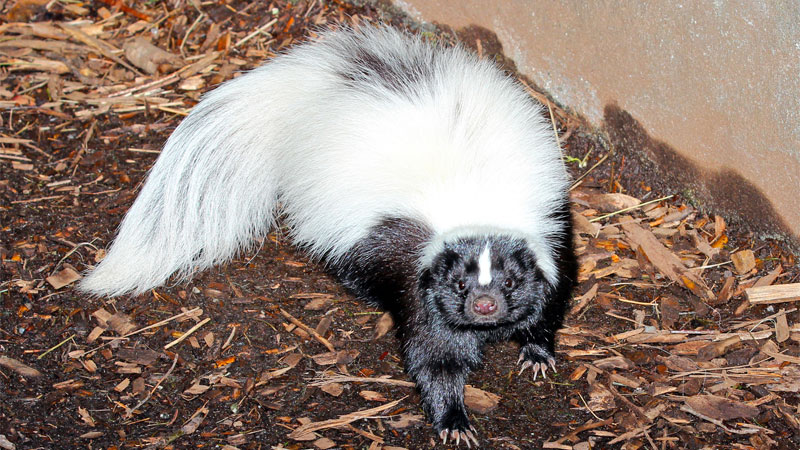 One of the largest species of skunk out there, these critters may be found throughout the southern US and Central America. They have a single stripe covering their back and a completely white tail.

While capable of climbing trees, the American hog-nosed skunk is specially adapted for digging and can even smell prey through the soil. 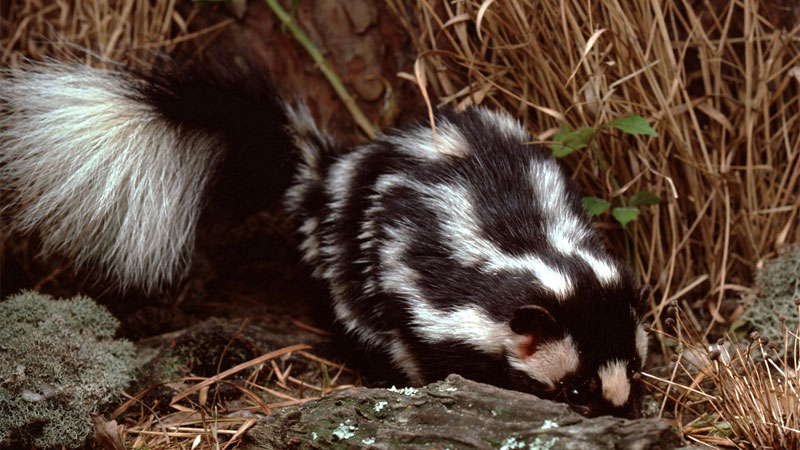 Boasting four stripes on the back, plus other markings, the eastern spotted skunk has a much more slender body than many other species.

With a habitat covering the eastern US, parts of Canada, and a small portion of northeastern Mexico, these skunks are highly active and can even climb trees. 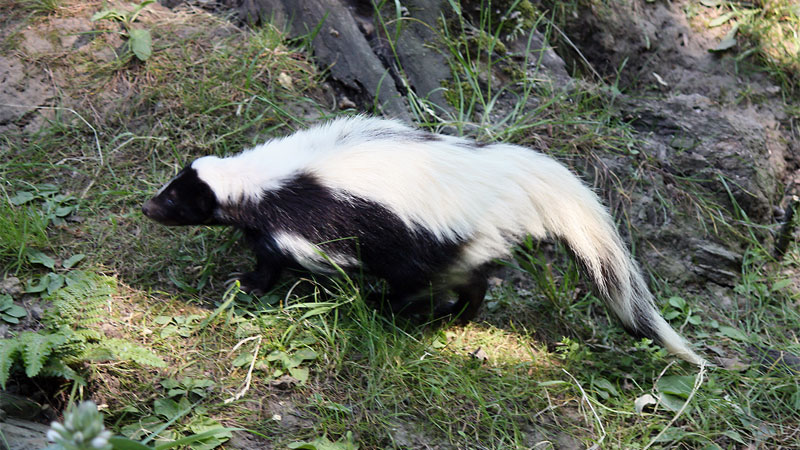 An old wives’ tale claims that you can tell the sex of a skunk by whether they have one or two stripes. This mistaken belief may well be the fault of the hooded skunk, which may have one, two, or no stripes on its back.

While they are very similar to the striped skunk in appearance, they actually have softer fur and longer tails, although you may not wish to get close enough to test this distinction for yourself. Oddly enough, hooded skunks are actually used for food by several cultures in their natural region. 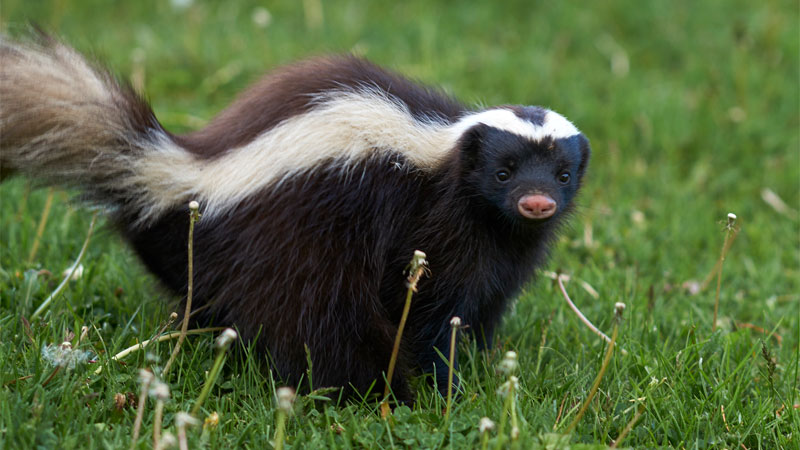 Found in the southern half of Argentina and Chile, these skunks have reddish brown to black fur with two white stripes down the back. They’re smaller than North American species and have teeth more adapted to eating insects than vertebrate prey.

This diet means they’ve been less affected by the destruction of natural habitats than many other creatures. Hunboldt’s hog-nosed skunks tend to hunt at dawn and dusk, preferring prey that’s easy to catch. 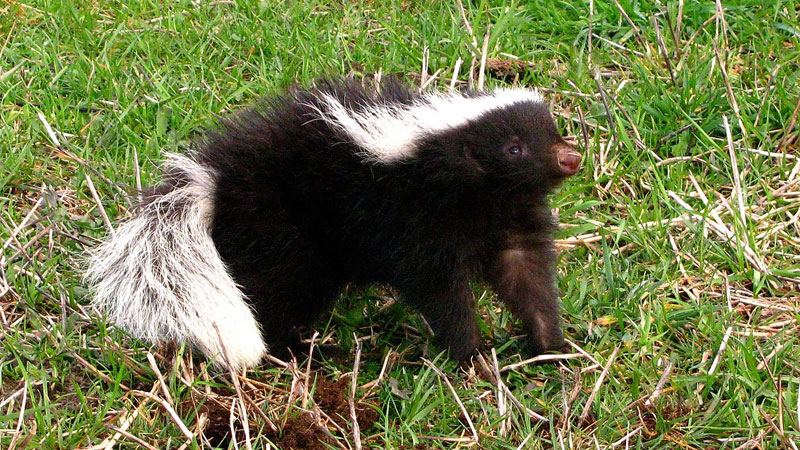 Found through much of central and southern South America, this little skunk has specially adapted teeth for its diet, which often includes small birds, snakes, and other vertebrate creatures in addition to plants.

As much of its habitat has been destroyed, these skunks have adapted to living among human settlements.

These small, weasel-like skunks can only be found on the western coast of Mexico and are considered a vulnerable species due to the encroachment of humans into their limited territory.

As with other spotted skunks, they can climb trees in search of food or a place to hide.

Found throughout Central America, this spotted skunk has a similar appearance to the western spotted skunk. It hunts primarily at night, often climbing trees in search of prey.

A small species with a small habitat range, striped hog-nosed skunks have two stripes going partway down the back and meeting on the head. They can be found in parts of Central America, as well as the northern coast of South America heading westward to the northern part of Peru.

Oddly enough, there’s also an isolated population found in the easternmost portions of Brazil, hundreds of miles from other populations. 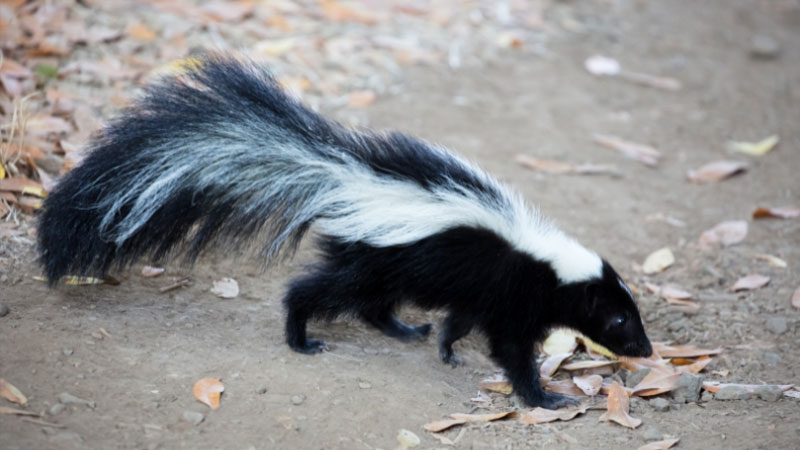 When you think of skunks, this is most likely the species that comes to mind. Striped skunks can be found everywhere from Northern Mexico to Southern Canada and are highly adaptable. Able to eat insects, rodents, small lizards, and even venomous snakes, these critters are an important part of the ecosystem.

They also happen to make great pets due to how sociable they are. Owning a skunk is legal in 17 states, although they must be de-sacked and usually registered. In the UK, it’s also legal to own a skunk, but illegal to de-sack one.

Striped skunks have two lighter stripes running down their back and tail and may sometimes have additional white markings. They’re quite intelligent and inquisitive, but also quite capable of defending themselves when threatened.

These skunks look as though someone was blending chocolate syrup into vanilla ice cream and decided to paint a skunk to match. The stripes tend to occur in threes and are found all over the skunk’s body.

Found in the western half of the US, northern Mexico, and southwestern Canada, these cute little critters not only eat berries, lizards, and small rodents; they also sometimes eat bees and wasps.

Stink badgers are neither badgers nor skunks, but are often considered honorary skunks because they’re close relatives and are part of the skunk family. Only two species of stink badger still exist.

The pantot (Mydaus marchei), or Palawan stink badger, is a carnivore from the western Philippines. Meanwhile, the teledu (Mydaus javanensis) is often referred to as the Sunda stink badger and may be found throughout much of the Sunda Islands.

This latter species also has a single thin white stripe down its back that make it look more like a skunk than its more badger-like sibling.