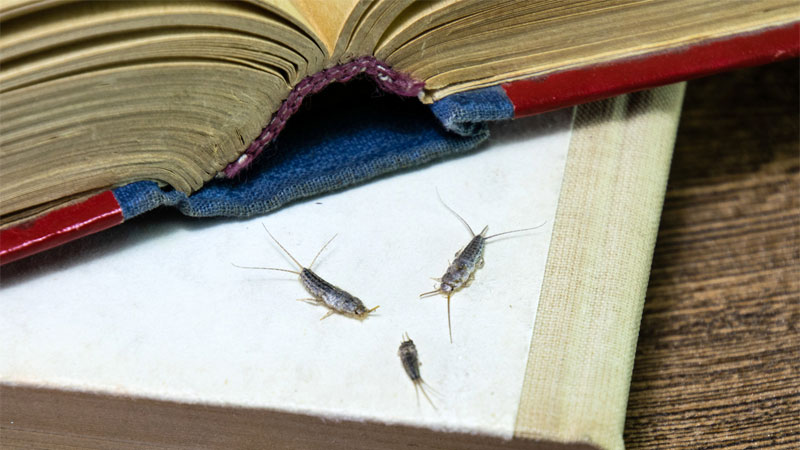 If you’ve ever worked in a restaurant, you might have encountered some pretty nasty bugs. The cockroach is perhaps first on your list of kitchen bugs to avoid, but another species often makes the rounds and can get restaurants shut down the moment one is spotted. We are, of course, talking about the silverfish.

But what you might not be aware of is the fact that there are more than 120 species of silverfish in the Order Zygentoma, as well as several other related orders of insects that also share the name.

The Entomological Society of America officially now only identifies the common silverfish as a true silverfish, but that’s not to say the term isn’t still widely used around the world for the many critters that are related to it.

While we could go on for days about all the silverfish in the world, let’s take a moment to merely focus on… 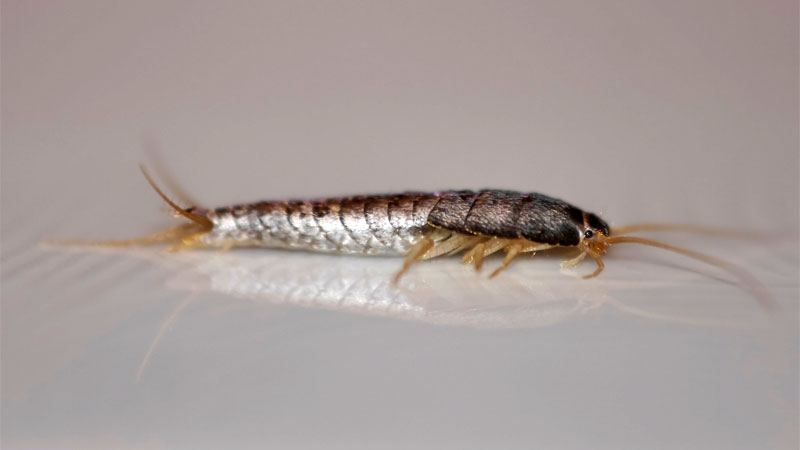 When you think of silverfish (at least in the US), this is probably the species that comes to mind. They’re up to an inch long and have silvery scales that can leave behind metallic streaks if the bug is squished.

They’re able to handle colder weather than most of the other critters that share their name and require higher humidity to thrive. This is why you’re most often going to find them in bathrooms, basements, and kitchens.

They hate the light and will slither away quickly like a snake if spotted. As with most silverfish, it has two long antennae, two cerci, and a tail-like filament between the cerci – all of which it can regenerate if they’re severed. A single female will lay up to 100 eggs in groups of less than 60 in tiny crevasses (such as between floorboards) and can live for up to three years.

As with many common household pests, the common silverfish loves sugars and starches. However, they’re also able to consume cellulose, meaning a large portion of your home is edible. This includes books, carpets, clothing, dandruff and shed skin, glue, hair, paper products, plaster, and even wallpaper.

As long as they have access to water, a common silverfish can survive up to a year without food.

Until recently, this species was considered to be a variant of the four-lined silverfish, but is now accepted as its own species. They can be found exclusively in south-eastern Spain where they tend to stick to arid locations. Interestingly, they seem to prefer living under tall grasses and debris beneath pines and junipers most.

There’s a lot of variation in how this species appears, and the four-lined silverfish doesn’t share its territory due to the drier conditions or it could (and was, for many years) easy to confuse the two species.

The biggest difference is in the bristly combs on their thoraxes. This species has double rows while the four-lined variation has single rows.

One of many species that are now being separated from the four-lined silverfish into their own species, this silverfish can be found throughout the Mediterranean and into western Asia, but was first described in Spain.

Unlike the four-lined silverfish, this species tends to be a uniform brown or gray, somewhat iridescent, and has two to four fringes running down its abdomen.

Not much is known about this type of silverfish, which was only discovered in the 1990s. What we do know is that it’s a strictly outdoor species and prefers to hide under detritus and other forest debris.

They have oblong, grayish bodies measuring less than an inch long. They have the typical two long antennae and three “tails” of most silverfish. However, their exact diet (believed to be cellulose or starches) is not yet known.

Firebrats are closely related to silverfish and often referred to as such. They’re pretty small, measuring only about 1/2 inches long. As with most types of silverfish, this species prefers the great outdoors and is usually found hiding under leaf litter.

Their bodies are oblong with the typical two antennae, two cerci, and “tail”, but instead of gray, they tend to be more brownish with darker brown bands.

Firebrands get their nickname because they prefer hot, humid areas. Unfortunately, this has led to them sometimes infesting bakeries or rooms with an active boiler or furnace.

They share the same broad diet of many other species, ranging from starches to cellulose. Common targets in homes include dog food and paper goods. If crushed, they can also leave stains on clothing.

This species has a more oval shape than the typical elongated teardrop you might imagine for silverfish. It also has a much duller body on which four brown lines can often be seen on the abdomen, leading to its common name.

As it’s native to southern Europe, the species has managed to stow away amidst various products, leading to infestations all over the world, with the exception of near-polar regions such as Canada and the UK.

As with many species of silverfish, the four-lined silverfish has three “tails” and two long antennae. It lives on a cellulose diet, which has made it a common pest throughout most of Europe and especially in places where wood products such as paper are stored. 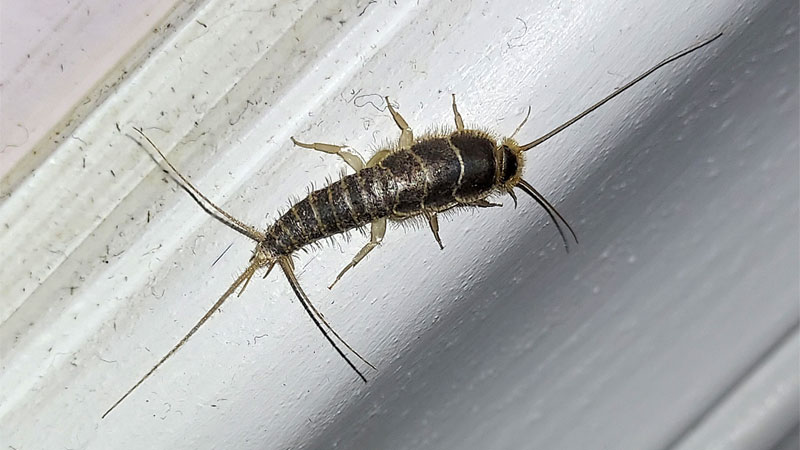 Often referred to as the long-tail silverfish, paper silverfish, or even the giant silverfish, this species was first officially described in 1905 by German entomologist Karl Leopold Escherich.

Unlike many species referred to as silverfish, this one isn’t worried about humidity and has adapted to eat all sorts of cellulose-based materials, from cardboard and paper to rayon fabric. This fact has made them a major threat in archives, libraries, and museums.

Despite being described in Africa, this species is largely cosmopolitan and is becoming especially problematic throughout Europe. The adults have scales that – if you cut off their antennae, two cerci, and epiproct (the “tail” of the silverfish) – their metallic sheen would make them resemble tiny cybermats.

Another scary fact is that this species develops slowly and can go for up to 10 months without food, meaning there’s no such thing as a quick cure for an infestation. 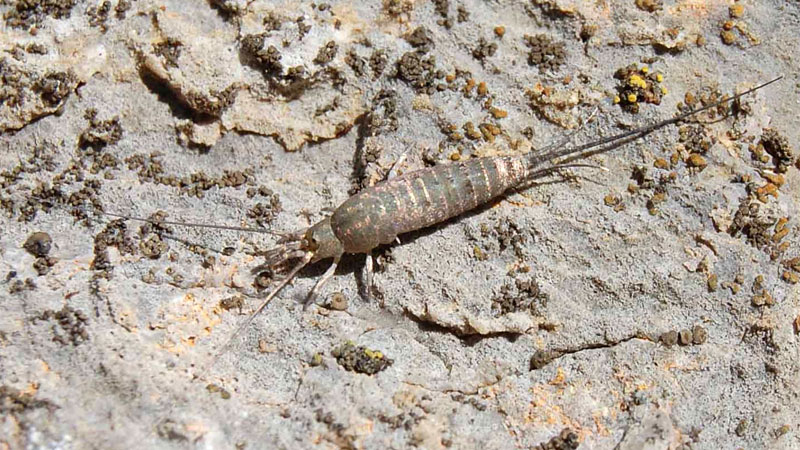 These primitive silverfish date back to the Paleozoic Era. Until recently, they were considered part of the order Thysanura, which is now split into Archaeognatha and Zygentoma (the order in which all other silverfish belong).

The factor that finally resulted in this split is that the epiproct (the tail-like appendage between the cerci) is significantly longer on bristletails than the cerci, whereas all other silverfish have roughly the same length of cerci and epiproct.

They can also be distinguished by the arched, almost hunched appearance of their thorax compared to the straighter backs of most silverfish.

There are roughly 500 species of bristletail across two families, none of which are known to invade homes. The various species have adapted to a wide range of habitats, with some being able to survive in the desert while others prefer life in moist soil.

Jumping bristletail silverfish subsist on algae, detritus, lichens, and moss and can live for up to four years.

Last but not least, we have a very rare species that went extinct soon after it was discovered. First seen in Camden England in 1988, only four specimens were ever seen at a time, always together, and they were known for their unusually loud, vulgar sounds which did more to reveal their presence than anything else.

Thankfully, this species went extinct in 1993, with only a few Camden preservationists even noticing their passing.