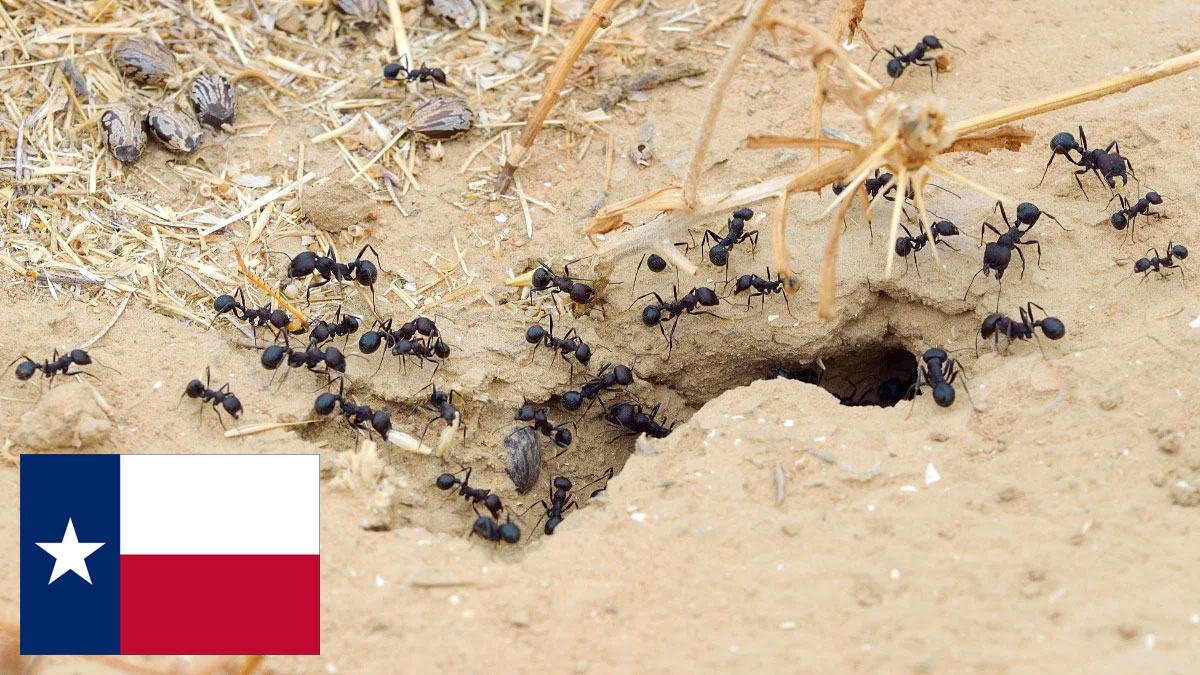 Ants are among the most common macroscopic (i.e. visible) life forms in the world. They’re found in every continent except Antarctica, and are so old that we may yet find fossils of ants even in that remote place.

Texas is no exception to this rule and is home to hundreds (if not more) species, many of which we’re still discovering. Here’s just a small sampling of them.

Types of Ants Found in Texas

This species of acrobat ant has been expanding its territory eastwards and has a distinct bi-colored body. The abdomen is a dark brown to black color while the rest of the body is a brighter orange-red. They prefer the Great Outdoors, and usually live under dead logs or detritus.

Carpenter ants have a bad reputation, but they’re actually important for the ecosystem and only a few species commonly invade homes. This particular species is fairly large, with a dark brown head, brown thorax and distinctive reddish-brown stripes on their abdomens.

While they’re known to live in wetlands, they prefer oak forests, as they like to build their nests in and under dead oak logs.

There are many ant species out there that can become a massive problem, and the Argentine ant is one of them. Their multi-queen colonies have a similar defense mechanism to dust bunnies. In other words, if you kill them in any way that can send off an alarm in the colony, they’ll have a population explosion.

Between their ability to create satellite colonies and their reaction to many pest control methods, you have to be careful evicting these critters from your home or garden. The best method tends to be poison baits, which they’ll take back to the queens.

It’s pretty rare to find this species invading homes, but it does happen. They hunt insects, from which they suck all the fluids like little vampires.

They have a light brownish red body with dark brown abdomen and usually live under dead logs it inside older trees.

This carpenter ant species is native to the southeastern US, but have made their way west. They prefer life in decaying wood and have a light brown coloration. Interestingly, this particular species doesn’t consume cellulose, but instead lives on tree sap.

They will also drink from corpses of insects and animals as the bodies slowly liquify.

Another type of carpenter ant, this desert-dwelling species comes in a wide range of colors. They’re sometimes found building nests under rocks or other groundcover. However, they’re nocturnal foragers and prefer to avoid human habitations.

These Texas natives collect seeds and store them in underground granaries. They’re an amber coloration and live in sandy soil, making them fairly easy to identify.

They’re not keen on cohabiting with humans, and will deliver a painful sting if handled, although they aren’t otherwise aggressive.

This species likes to take up residence in abandoned termite colonies, often leading to them being mistaken for termites (which are actually a type of roach). They’re diurnal and will venture into gardens during the day to harvest honeydew.

This woodland species has been enjoying quite the population explosion in recent years, prompting a lot more attention than they used to get.

They prefer living in detritus, which has led to infestations under mulch in gardens and from there, occasionally invading homes. They eat mainly nectar and honeydew, which means they both benefit the garden and will protect many common garden pests.

Known for small, single queen colonies of around 100 ants, this species of carpenter ant likes building its nest in damp, sheltered soil. However, it’s also known to invade homes and nest inside the walls.

As both the common and scientific names imply, this is not a native of Texas but has slowly migrated west. These little black ants don’t actually eat wood, but they do consume the cellulose that binds wood together. In most cases they prefer routine wood and are an important part of the ecosystem.

However, they’re known to invade homes where the wood is already damaged. Thus, if you have a carpenter ant problem, there’s a good chance they’re just a symptom of a much larger problem.

This curious species has a long, amber-brown body and long antennae. They’re not generally considered to be an indoor pest, but they prey on bugs that often are. If you have a leak in your pipes they may sneak into your home while hunting.

These peculiar ants are extremely long and thin, hence the name. As with many ant species, these live in single queen colonies and prefer life in the woods to living in a home.

While they rarely pose a problem, this species does have a rather painful sting and shouldn’t be provoked.

This species not only has a colorful name, they have an interesting lifestyle as well. Some nests don’t even have a queen and the females actually lay eggs based upon a hierarchy. The strongest females will lay the most eggs.

But beyond this warrior culture, they’re actually very peaceful and live in deadwood.

While the name of this species sounds distinctly Texan, it actually refers to the zig-zag movements they make. They’re actually very common and will sometimes invade homes or other structures.

Oddly enough, they will consume honeydew in the spring and fall, then turn on their cattle (and other insects), devouring them during the summer.

This desert-dwelling ant builds underground nests with multiple entrances, usually sheltered by debris or other objects. They primarily eat insects and will also feed on decomposing carcasses (and other bugs eating said corpses) or forage as needed.

These ants have single queen colonies of up to 200 individuals that will split off into satellites as needed. They eat nectar and are known to have wings leading up to a mating flight, after which they lose the wings regardless of whether they were queens.

Harvester ants make up a decent percentage of all ants and are any ant species which harvests plant matter to grow fungi or mold or otherwise actively engage in agriculture. This particular species is sometimes mistaken for the red imported fire ant but is far more docile.

This particular species stores seeds in underground granaries to provide food during the winter, making them one of several species that might have inspired the fable of the grasshopper and the ant. 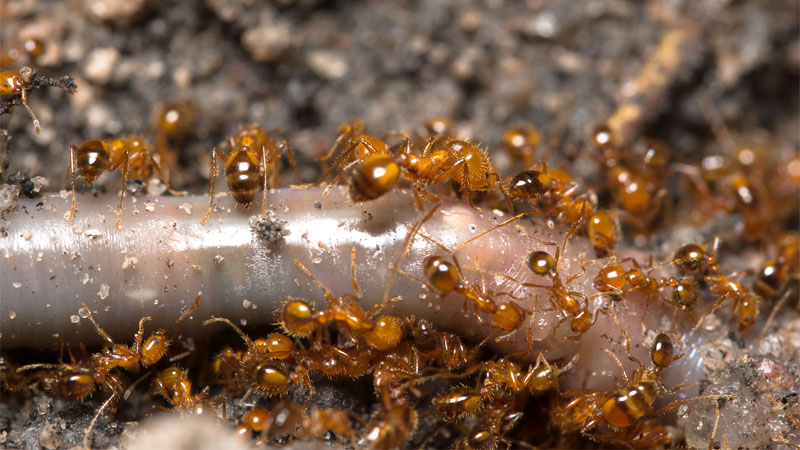 While not the only species of fire ant out there, this is perhaps the most famous one in the US. As the name implies, this species (often called RIFAs, for short) is an invasive species that originated in South America. They have multiple queens and are known to create satellite colonies.

They can vary in size and coloration, but all RIFAs are attracted to electricity, often leading to wire damage in homes. In addition, this is one of many species that will react aggressively if their colony is threatened and will also breed as a defense.

Thankfully, they’re not as deadly as some of the stories suggest.

As with many harvester species, this one collects seeds for food. They have colonies that can number as many as 15,000 members. Oddly enough, rough harvester ants use slave labor instead of having a worker caste, making them rather unusual in the ant world.

Native to (you guessed it) Texas, this species of carpenter ant prefers juniper and oak to other trees. Their bodies tend to be dark brown to black, with a reddish-brown thorax and legs.

They’re not found as often invading homes as their eastern counterparts, but infestations are not unheard of.

Sometimes referred to as the town ant, this species is known to harvest from over 200 different plant species. While not a problem in small numbers, they can grow into massive colonies capable of completely defoliating trees.

Due to being a polymorphic species, it’s hard to identify them based on individual size or color. However, their massive (often in the millions) colony size and the potential for multiple queens tends to set them apart from similar species.

These peculiar ants have a translucent yellow body, although some variation is possible. Shades closer to red or amber are both well-documented and tend to vary by colony as opposed to having variations within a specific colony.

They’re a common prey species fore many predators, such as the mustached tiger beetle (Ellipsoptera hirtilabris).