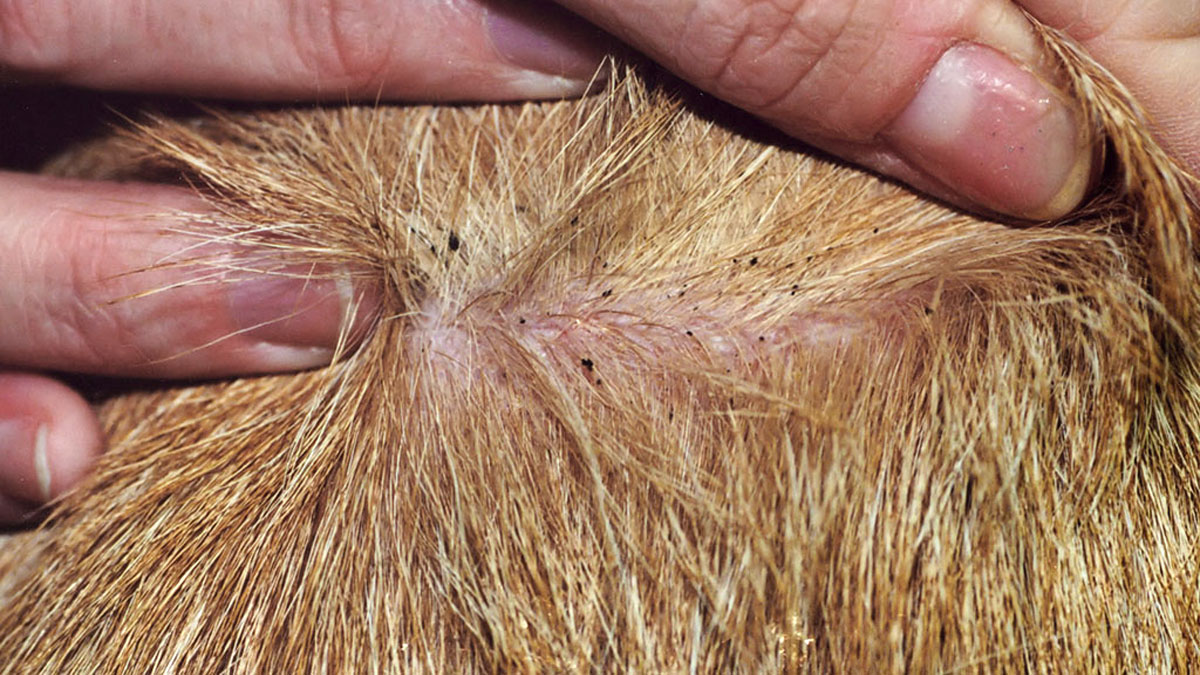 If you’ve ever had a cat or dog in the family, there’s a good chance you’ve run into a particular pest that looks a lot like a poppy seed at a distance. These little nasties are, of course, fleas.

But aside from being tiny terrors, fleas are also sometimes excellent little ninjas, skillfully evading detection with their only call signs being flea dirt and lots of itching. And that’s what we’re looking at today (no, not the itching, the flea dirt).

A critter’s poop can actually tell us a lot about that critter, from its diet to its habits, changes in behavior during its life cycle, and even its general health or ability to spread disease. So let’s get down and dirty (get it?) with a comprehensive look at flea poop.

First of all, let’s look at how to pick flea dirt out of a lineup. This is an important step if you aren’t sure what type of pest is hanging around.

Frass (i.e. poop) can look very similar from one pest to another, but there are ways to narrow down the list of suspects. 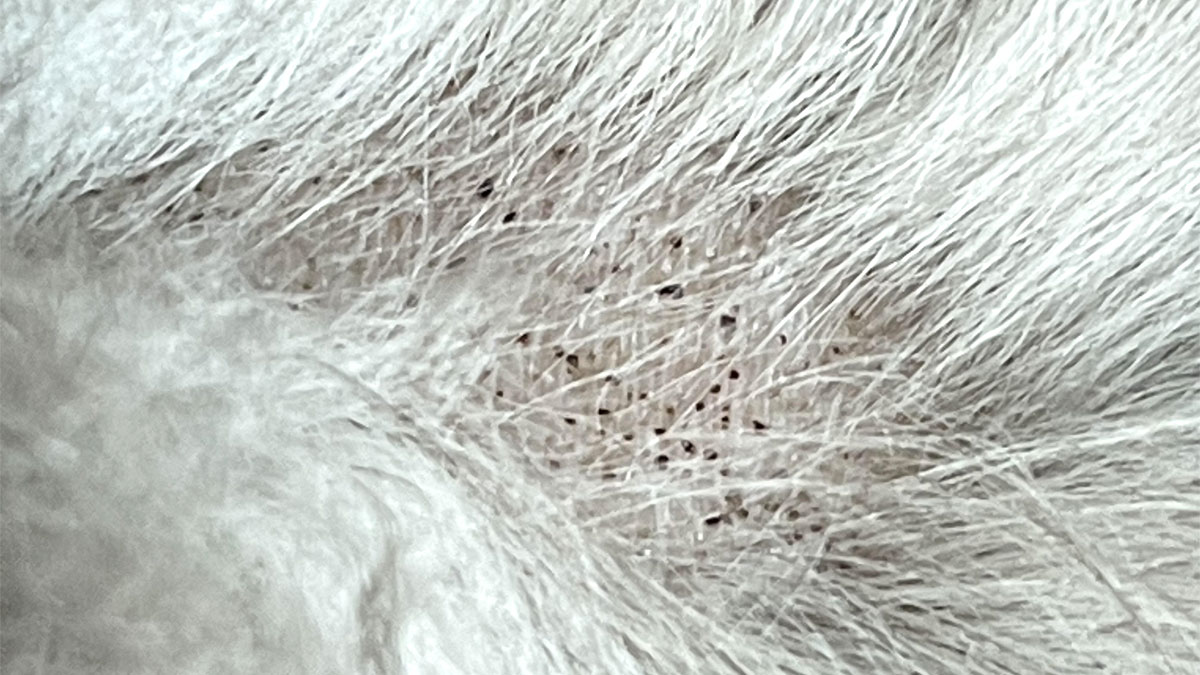 Flea dirt gets its name from the fact that it’s often mistaken for specks of dirt. They’re reddish black to black in appearance and are about the same size as ground pepper with a typically round shape. 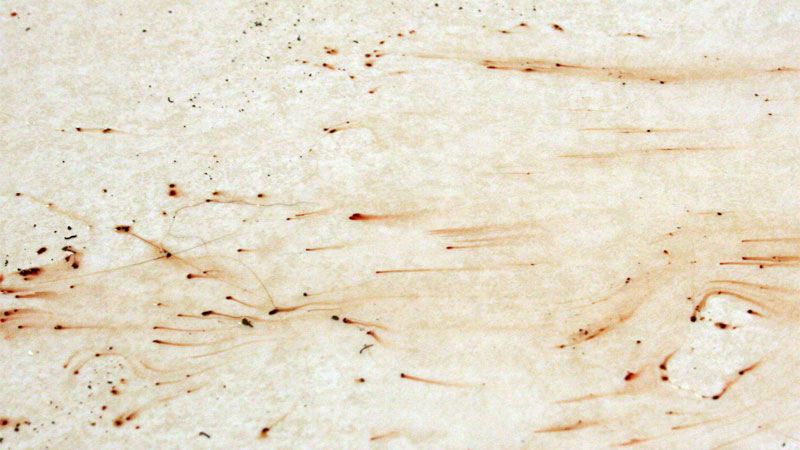 The good news is it’s pretty easy to tell the difference between flea dirt and actual dirt. Simply harvest a bit of the suspected flea dirt and place it on a white paper towel. Next, add a couple drops of water and give it a few seconds.

Real dirt (or pepper) won’t react much to the water. However, flea dirt is made up of partially digested blood. When it comes into contact with the drops of water, it will dissolve, leaving behind a little red stain.

If you see this stain, it’s almost certainly a flea. Note this is the same test you can use to identify bed bug frass.

Speaking of bed bugs, it would be really difficult to tell the difference between bed bug poop and flea poop if not for their locations. Unlike fleas, which prefer pets to humans, bed bugs prefer humans to pets.

Thus, if the suspected poop is in your bed, it’s most likely from a bed bug, whereas flea dirt will usually be where your pets sleep. However, if your cat or dog likes to sleep in your bed, things can remain a bit confusing.

Telling flea dirt and flea eggs apart is actually quite easy. The eggs are oval, but so small you probably won’t spot the shape. What you can see, however, is that the eggs are an off-whilte and about the size of a grain of salt.

Thus, spotting the difference is literally a matter of distinguishing between salt and pepper.

We touched upon this already, but it’s a good idea to go into more detail. Knowing where flea dirt can appear allows you to be proactive and catch an infestation early on.

Where Is Flea Dirt Found? 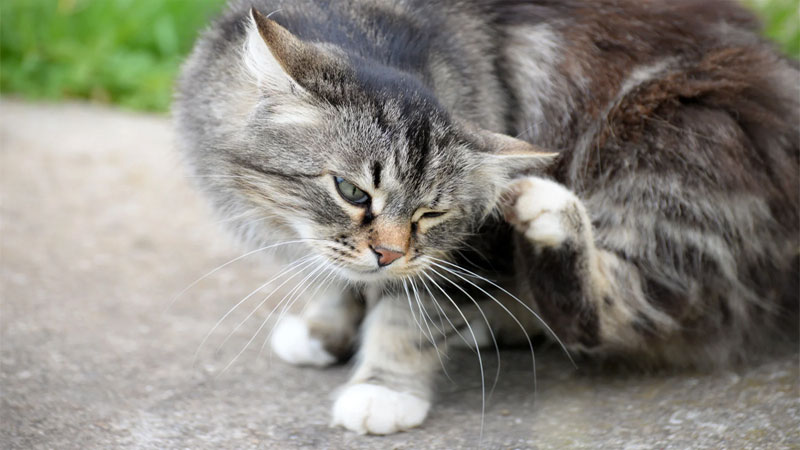 Flea dirt is most often discovered on your cat or dog. It usually happens while you’re petting them, but you can also discover the dirt in spots where the furry family member has scratched so much they’ve lost a bit of fur.

Something else to note is that fleas tend to prefer feeding at certain areas of your pet’s body. Near the base of the tail and around the groin area are very popular spots, and they will also often feed along the spine.

It’s far less common for fleas to attack the head or neck, so spotting fleas on the face can be a sign that the infestation is moderate to severe. 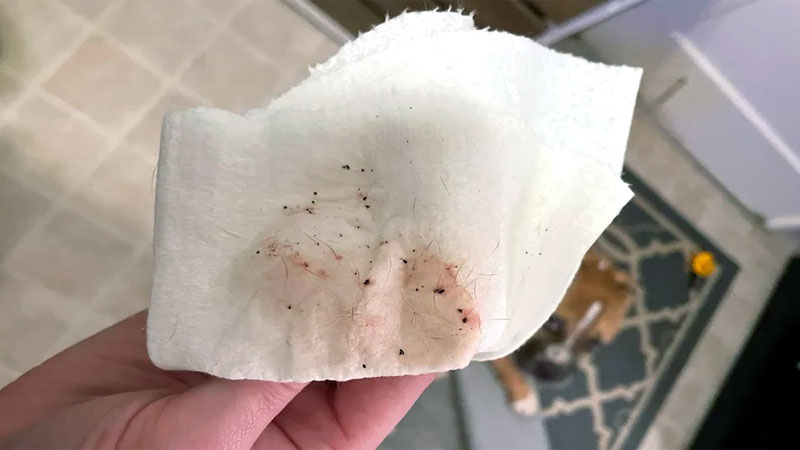 When you spot flea dirt, a number of questions tend to come up. In many cases, those questions are related to whether the flea dirt really does belong to fleas or if it’s from another critter or even just dirt.

But there are still questions that remain once a positive ID has been made. Here are a few of the most common ones.

Does Flea Dirt Mean an Infestation?

This is sometimes due to the flea being accidentally eaten while a cat or dog is grooming. In other cases, the fleas simply scurried away while you were checking the pet’s fur.

And while fleas prefer to remain on the host, there are occasions when they’ll jump ship temporarily, leaving behind the frass and eggs while the adult is busy setting up shop on another pet or is hiding in a popular nap spot, waiting for the host to return.

That said, if you find flea dirt, you definitely have fleas (or some other blood sucker) in the house.

Is Flea Dirt Harmful to Humans?

This is a very real concern, and you’re likely to get a couple different answers. The simple truth is that flea dirt is very much like the Earth – mostly harmless.

People with allergies or breathing problems such as asthma may have a reaction to flea dirt. Infants and toddlers may have a slightly more severe allergic reaction as well.

Also, since it’s poop, you should wash your hands after coming in contact with it. However, it’s harmless to most people.

Is Flea Dirt Harmful to Pets? 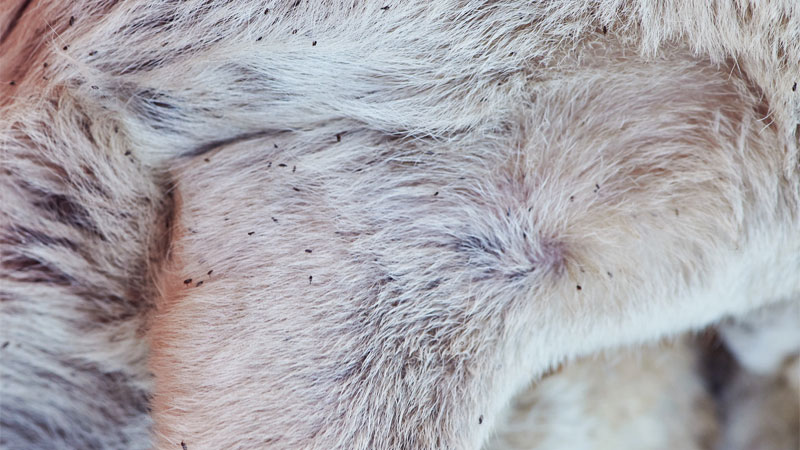 The same general answer applies here. Cats or dogs that have sensitivity to dust or allergens may have a reaction to flea dirt. However, the real threat to your pets isn’t from the flea dirt, but rather the critter that produces it.

So let’s say you found flea dirt, confirmed it was flea dirt, and have accepted that someone wasn’t just seasoning your pet. Now what?

The presence of flea dirt is a sign of a much bigger problem, which needs to be addressed ASAP to avoid a serious infestation. Remember, enough fleas can literally kill a kitten or puppy, and they WILL attack you and your kids if they don’t have access to your pets.

But in the meantime, removing the flea dirt can actually help you fight the current flea infestation. No, really, you can fight fleas just by cleaning up their poop. Let’s look at how.

Will Flea Dirt Go Away on Its Own?

In a manner of speaking, yes. You can leave the flea dirt alone and directly treat the flea problem. Your pet will then get rid of the flea dirt on their own as they groom. However, this can pose a few problems, especially if you have more than one cat.

Fleas are disease vectors (they were the true reason the bubonic plague spread so quickly). While unlikely, you should never assume it’s impossible for your cat or dog to pick up a disease or parasite from eating flea dirt. The flea dirt can also play a role in contracting cat scratch fever.

The other major concern is if you have multiple pets and one of them is a carrier for an illness that they may be asymptomatic to. This is especially true of diseases such as FeLV, where some cats never show symptoms but others can become dangerously ill.

When one cat or dog grooms another, they can ingest the flea dirt, which (since it contains blood) may spread the pathogen to the one doing the grooming.

Again, these scenarios are pretty rare, but it never hurts to use caution when dealing with any pest known to carry disease or feed on blood.

Does Flea Dirt Come Off Easily?

This depends largely upon the method you use. If you try to pick out the flea dirt by hand, you could be there all day, but if you use the methods below, the dirt will come off rather easily. 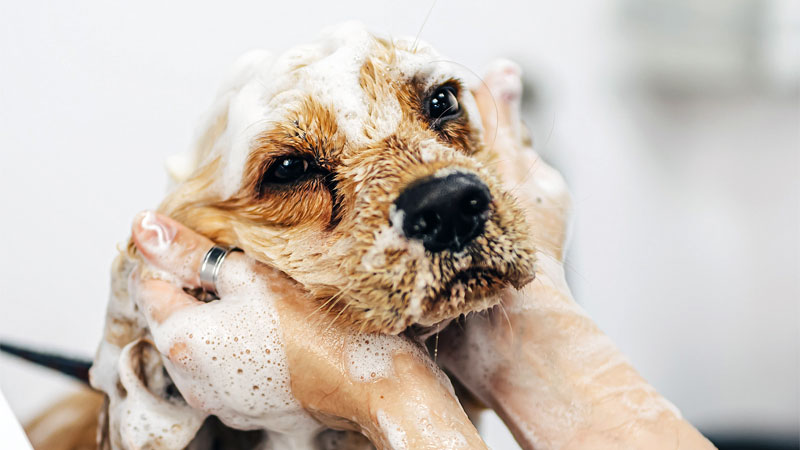 There are two easy ways to remove flea dirt, both of which can also address the flea problem to some extent.

The first option is bathing. Use a flea shampoo or a shampoo that’s safe for pets (such as Mane and Tail), starting at the neck. By getting the neck soapy first, fleas will be unable to flee the water and swarm the face.

A good bathing will dissolve the flea dirt, dislodge many fleas (which will then drown) and even get some of the eggs all in one fell swoop – even if you’re not using a flea shampoo!

The second option is to use a flea comb. Avoid matted fur and start at the neck, working your way down. The fine teeth will dislodge flea dirt, eggs, and even fleas!