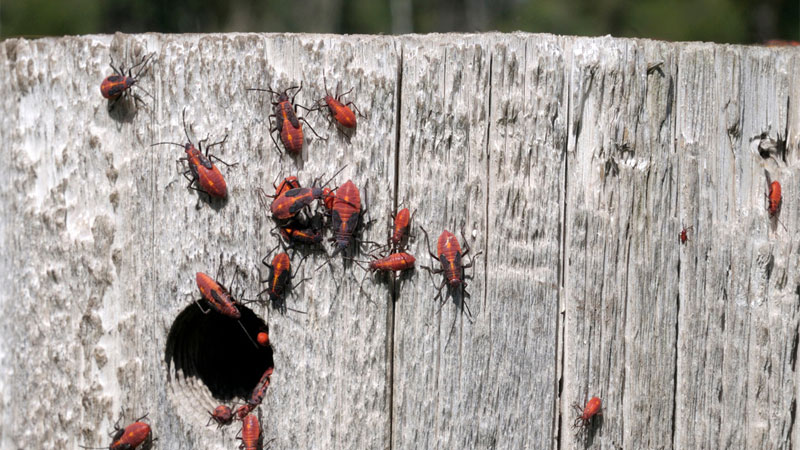 You may have already heard that the boxelder (or box elder) bug is one of the North America’s true species of bugs. Primarily, they are found on the boxelder trees but also on ash and maple trees.

But, have you ever wondered about about other specifics of baby boxelder bugs like:

What do they look like? Are they similar to the adult bugs? How do you control baby boxelder bugs that are infiltrating your property?

In this article, we’ll try to answer these questions, so let’s get started.

When boxelder bugs are fully grown, they measure about 1/2 inches long and nearly 1/3 inches wide. These adult bugs have three red lines on the thorax and some fine red lines on their every wing.

They are mostly black in color, while the abdomen is red. When the bug is at rest, then the wings will lie flat on its back.

When boxelder bugs lay eggs, these eggs are initially yellow in color. However, the color then changes to red when the nymphs start to develop inside of the egg.

After the eggs hatch, the baby box elder bugs or the nymphs are bright red in color. As they approach adulthood, they slowly gain their black color with markings on their wings as well.

Adult boxelder bugs lay their eggs on the leaves or inside the host trees. The eggs are red or reddish-brown in color and oval-shaped

The reddish color of the eggs gives them an advantage since these eggs look similar to the trees and blend right in. This gives them excellent protection against many predators.

After a few days, their eggs hatch, and bright red colored nymphs come out which are the baby boxelder bugs.

Baby boxelder bugs are similar to the adults; the only difference between the babies and adults is their size and color. During the summer, the baby boxelders turn into adults. 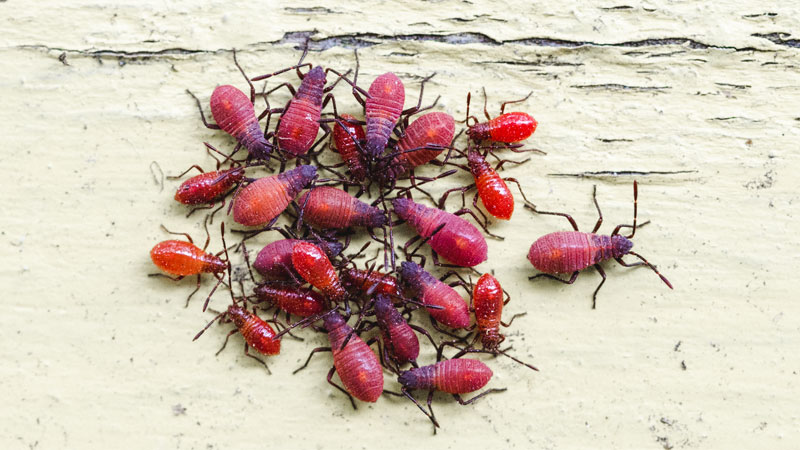 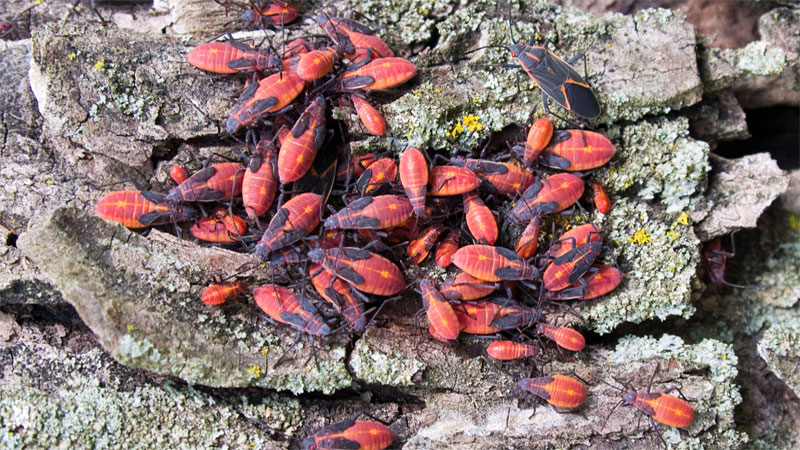 What Do Boxelder Bugs Eat?

When it comes to eating, boxelder bugs are mainly plant eaters like stink bugs and feed on plant tissues like leaves, fresh twigs, and flowers. They can also extract the liquids from the host trees.

Extracting liquid from the host plants by the box elder bugs doesn’t cause any significant damage to the plants and trees, but if a large population of these bugs start feeding, then they’re able to cause severe damage to the trees.

See Also: What Do Earwigs Eat?

How to Control Baby Boxelder Bugs

There can be several techniques that can be used to control baby boxelder bugs and the adults. A few of them are listed below:

Read Also: How to Get Rid of Lovebugs

Getting rid of baby boxelder bugs can get quite tricky if there is an infestation on your property.

This is where professional help comes into the picture. They can eliminate this problem for you more efficiently, economically, and under a stipulated time.

Professional exterminators can be surprisingly affordable and by clicking the link below, you can get free quotes from multiple local pest control companies that will help you choose the right and cost-effective alternative for your boxelder bug infestation problem.

Baby boxelder bugs are relatively unknown as compared to other pests like wasps, fleas, moths, etc.

That’s why this article is a must-read for anyone who wants to know more about these beautiful insects, like where do they live, how do they look, how to control them, etc.

Although mostly found on trees, they typically don’t wreak much havoc until they attack in larger numbers.

And while there are innumerable ways to deal with them, it would be best to hire a professional exterminator if the situation gets out of control.

Have you ever had to deal with baby boxelder bugs infiltrating your property? Do let us know in the comments below.

1 thought on “What Do Baby Boxelder Bugs Look Like? (Identifying Boxelder Nymphs)”